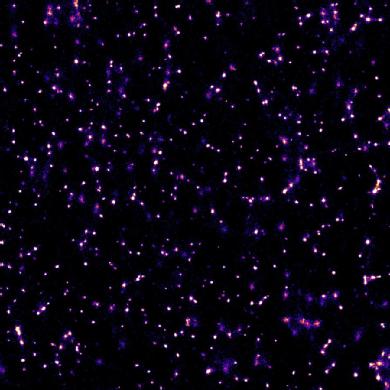 A previously unknown component of our cells that delivers proteins like a bike courier in heavy traffic could shed light on the mechanisms that allow cells to spread in diseases such as cancer.

The new vesicle discovered by scientists from the University of Warwick is first to be identified in twenty years and is the smallest known. The discovery is detailed in a paper published today (31 October) in the Journal of Cell Biology and was supported by funding from the Medical Research Council.

There are many different cell types in the body with different jobs, which are influenced by the types of protein on their surfaces. These are controlled by membrane traffic, which transports proteins to the surface once they are produced, and takes them away and degrades them when they are no longer needed.

Vesicles are part of the membrane traffic that fulfils a number of different but tightly controlled functions inside cells, such as bringing in cargo, moving it around and shipping out new cargo. But the inside of a cell is incredibly busy and congested, making it difficult to transport anything inside the cell. A small vesicle would be better suited for delivering a protein cargo quickly, much like how a bike courier moves faster through traffic.

The ‘cellular bike couriers’ discovered by the scientists from Warwick Medical School, named intracellular nanovesicles (INVs), are approximately 30 nanometres across, and you could line up over thirty thousand of them in a single millimetre. Previously, the smallest vesicles discovered were synaptic vesicles which are found in neurons and are around 40 nanometres across, although in a typical cell in the human body, the vesicles tend to be closer to 80 nanometres.

Professor Stephen Royle said: “Collectively in the field, we thought we had identified all of the vesicle types that are found in cells. It turns out that there was another one and the reason that it’s been missed is because they’re very, very small.

“These vesicles have never been seen before and lot of people have focused on other vesicles, such as the long tubules in cells. But we know that when proteins reach the cell’s surface they’re not delivered in a big tube, it’s something smaller. We think it’s these INVs.” 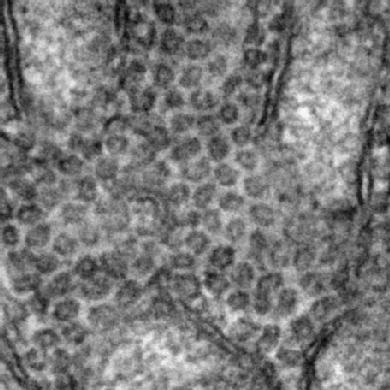 The scientists only spotted the tiny couriers by accident while trying to trap proteins inside living cells. Normally this kind of experiment allows scientist to trap a protein of interest and any proteins that are stuck to it. When they trapped a protein called TPD54, instead of other proteins, they fished out the INVs.

Because of their extremely small size, the team had to use electron microscopy and the Warwick Open Source Microscope, a super-resolution light microscope built at the University of Warwick – and even then, the INVs were at the limits of what they could visualise at that scale.

After finding the vesicles, the team needed to make sure that the INVs were useful inside the cell. In particular, the INVs need to carry around cargo, since that is the main function of a membrane trafficking vesicle. However, the INVs also need to have the machinery to allow them to travel, to find their destination and to fuse with the cell membrane.

Dr Gabrielle Larocque said: “We screened the INVs for a family of proteins called Rabs, of which there are more than sixty in human cells. We found that these vesicles have lots of different Rab proteins on and each Rab is an indicator of a different compartment within the cells. By trapping the vesicles we can see these different Rabs and we know that they’re delivering to and from all these different places.”

The team made their discovery during their investigations of the protein TDP54, one of the most abundant proteins found in our cells but the subject of little research in the past. It is one of a family of proteins that are overexpressed in cancer. As the proteins in the membrane of a cell are involved in its ability to migrate, the team are now looking at whether TPDs are involved in the process of cancer tumours spreading to new sites.

The findings will also be useful to the biotech industry, which also manufactures proteins in cells. Professor Royle adds: “These vesicles are involved in transporting those proteins so if you’re going to make antibodies on an industrial scale, for instance, those antibodies are going to get secreted via these vesicles. A better understanding of how this process works can improve production and make it more efficient.”