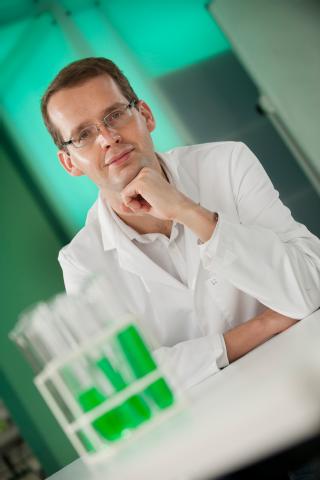 Dr Matthew Gibson, of the University of Warwick’s Department of Chemistry, has won the Life Sciences category of the Royal Society of Chemistry’s 2014 Emerging Technologies Competition.

Citing Dr Gibson’s “novel application of a bio-inspired solution to cryopreserve cells to make much better use of precious donated blood”, the Royal Society of Chemistry (RSC) prize follows the development of technology that significantly enhances the cryopreservation of donor cell and blood by addition of a synthetic polymer that prevents ice crystal growth.

The ability to prevent the growth of ice crystals has long been seen as an important step in the preservation of organic materials, including blood, stem cells and tissues derived from them - with substantial commercial possibilities for technologies that can address this challenge.

The research team, led by Dr Gibson, sought to develop new methods which could enable clinical practices to move away from organic solutions and glycerol.

Discussing his work Dr Gibson said that the research developed after noticing that certain types of fish survive in sub-zero sea temperatures without their blood freezing. “We used this as a starting point to search for synthetic substances which reflect what nature already does so well. Through further research we ascertained that polyvinyl alcohol mimics the properties of the antifreeze proteins found in fish”, said Dr Gibson.

Polyvinyl alcohol was found to reduce the growth of ice crystals during thawing, the need for organic solvents and the time between defrosting and having transfusion-ready blood by eliminating the need to remove solvent.

As a result of these properties, the new method has the potential to vastly extend the shelf life of blood stored for medical procedures and therefore preventing dangerous dips in blood availability at certain times of the year.

“Whilst the World Health Organisation reports that 108m blood donations are made every year, the unavailability of blood has led to deaths and many patients suffering from ill-health. Given this context, new technology, such as that developed by Dr Gibson, could significantly improve this situation and has the potential to transform the health opportunities for millions of people globally”, says Dr Laura Lane of Warwick Ventures.

In regard to the commercial application of Dr Gibson’s Work, Dr Lane suggests that with the stem cell therapy market currently estimated at $4.3bn and expected to grow at a rate of 11.7% annually, the new technology could play a “significant role in this developing sector”.