· A gunmetal disc excavated from the wreck site of a Portuguese Armada Ship identified as a mariner’s astrolabe – and the earliest known example - by engineers at WMG, University of Warwick is to be published in the The International Journal of Nautical Archaeology

· The astrolabe was discovered by David L. Mearns of Blue Water Recoveries Ltd, who directed the three-year archaeological project in collaboration with Oman’s Ministry of Heritage and Culture

· It has been named the Sodré astrolabe after the commander of the ship in which it was found: Vicente Sodré was the maternal uncle of Vasco da Gama and died when his ship, the Esmeralda, wrecked on the remote Omani Island of Al Hallaniyah in 1503 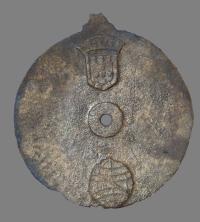 The Sodré astrolabe has made it into the Guinness Book of world records is believed to have been made between 1496 and 1501 and is unique in comparison to all other mariner’s astrolabes. 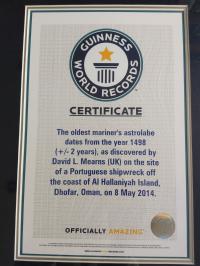 A website of the overall project, including additional details of the history, science and archaeology of the wreck site can be found at: http://esmeraldashipwreck.com

WMG is a world leading research and education group and an academic department of the University of Warwick, established by Professor Lord Kumar Bhattacharyya in 1980 in order to reinvigorate UK manufacturing through the application of cutting edge research and effective knowledge transfer.

WMG has pioneered an international model for working with industry, commerce and public sectors and holds a unique position between academia and industry. The Group’s strength is to provide companies with the opportunity to gain a competitive edge by understanding a company’s strategy and working in partnership with them to create, through multidisciplinary research, ground-breaking products, processes and services.

David L. Mearns is one of the world’s most experienced deep sea search and recovery experts. He has led the research and discovery of twenty-five major shipwrecks around the world and is best known for locating the wrecks of HMS Hood in 2001, the British bulk carrier Derbyshire in 1994, and the cargo ship Lucona sunk by a time bomb as part of an Austrian insurance fraud scheme. He was awarded an Honorary Order of Australia Medal for locating the wrecks of HMAS Sydney in 2008 and AHS Centaur in 2009. In 2015 he was a member of Paul Allen’s team that successfully located the wreck of the Japanese super battleship MUSASHI and recovered the bell of HMS Hood on behalf of the UK Ministry of Defence. Most recently David led the privately funded search that located the Piper Malibu airplane carrying the Cardiff City footballer Emiliano Sala and piloted by David Ibbotson that crashed in the English Channel off the coast of Guernsey.