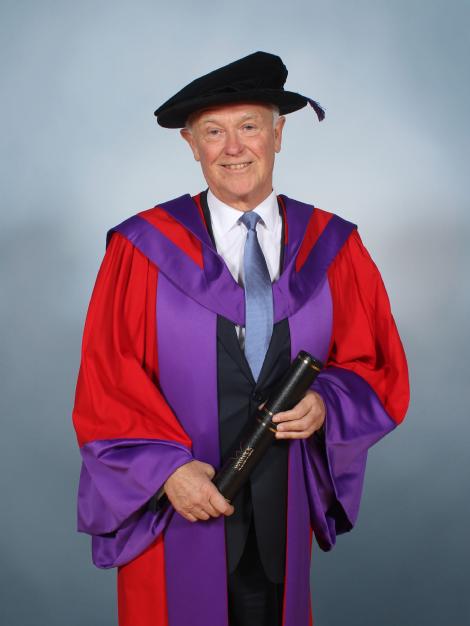 As a founder of one of the world’s largest airlines, Emirates, Sir Tim Clark has seen the industry change beyond recognition.

Starting straight from university as a 21 year old in 1975 at British Caledonian, Sir Tim today serves as Emirates’ President and chairs the company’s charitable foundation, the Emirates Airline Foundation.

In recognition of his leading role in the aviation industrial sector, Sir Tim was awarded an Honorary Doctor of Laws by the University of Warwick during the Winter 2018 Degree Congregations. Reflecting on his career before the ceremony Sir Tim said “When I came into the business in the early 1970s we weren’t talking about propeller airplanes and biplanes, but the industry has scaled up enormously.

“The demand for travel has gone through the roof in the last 30, 40 years and the affordability of air travel is so great that the scale of operations for carriers such as ourselves, reacting to market demand, has changed everything we do.

“You see the A380 now, an aircraft that will carry 615 people. When I came into the business the largest aircraft was the Boeing 707 and that carried 133 people.” On how the world has and will continue to change during his time in industry, Sir Tim argues that “what see today will bear no resemblance to what we are looking at in ten of fifteen years”.

Speaking of the world those graduating from Warwick this year are entering, Sir Tim says it is one that is going through “a major change” in how people live their lives.

“Whether it is lifestyle, fashion of aspiration a lot of things have changed” and there has been a “huge transposition of the way people think about themselves, what they aspire to do and how they want to get there – and that backs into the airline sector as we need to be a service provider, in a highly competitive business, to what people really want”.

Through his role as Chair of the Emirates’ Airline Foundation, a charitable organisation that supports projects including schools and hospitals across Africa and Asia, Sir Tim believes that it is key for the next generation of business leaders to think about the responsibilities companies have to the world around them and think of those as the ones for whom they would like to work.

“The brand of tomorrow has to be a brand that is balanced, that is aware of what it does and how it does it and start to balance out the commercialism with the responsibilities that goes with something that is a big as [Emirates]."

The Emirates Airline Foundation was started in support of children suffering from AIDS and has grown into a larger operation, with Emirates also supporting wildlife conversation, alongside the work of the Duke of Cambridge, with the aim of ending the poaching of endangered species.

This work has seen Emirates brand their aircraft with those species facing extinction. “The fact of the matter is, the more you do of that, and the more it enriches your brand, the more it brings people in”. This has seen Sir Tim voicing announcements on Emirates aircraft arguing against purchasing goods made from poached animals.

“I’ve seen too much corporate malfeasance and lack of governance”, says Sir Tim. New graduates should look at what they are going into and look for companies that have a “wholesome approach to the way they go about their business model”.

Further to his Hon. LLD from the University of Warwick, Sir Tim has previously been awarded Legion d’Honneur by the French government and was made a Fellow of the Royal Aeronautical Society.