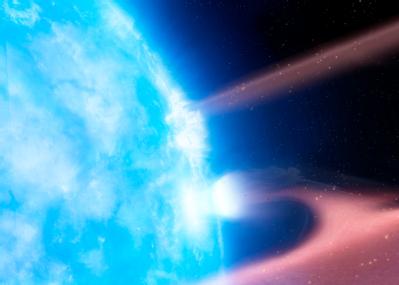 The moment that debris from destroyed planets impacts the surface of a white dwarf star has been observed for the first time by astronomers at the University of Warwick.

They have used X-rays to detect the rocky and gaseous material left behind by a planetary system after its host star dies as it collides and is consumed within the surface of the star.

Published today (9 February) in the journal Nature, the results are the first direct measurement of the accretion of rocky material onto a white dwarf, and confirm decades of indirect evidence of accretion in over a thousand stars so far. The observed event occurred billions of years after the formation of the planetary system.

The fate of most stars, including those like our Sun, is to become a white dwarf. Over 300,000 white dwarf stars have been discovered in our galaxy, and many are believed to be accreting the debris from planets and other objects that once orbited them.

For several decades, astronomers have used spectroscopy at optical and ultraviolet wavelengths to measure the abundances of elements on the surface of the star and work out from that the composition of the object it came from. Astronomers have indirect evidence that these objects are actively accreting from spectroscopic observations, which show 25–50% of white dwarfs with heavy elements such as iron, calcium, magnesium polluting their atmospheres.

Until now though, astronomers had not seen the material as it was pulled into the star.

Dr Tim Cunningham of the University of Warwick Department of Physics said: “We have finally seen material actually entering the star’s atmosphere. It is the first time we’ve been able to derive an accretion rate that doesn’t depend on detailed models of the white dwarf atmosphere. What’s quite remarkable is that it agrees extremely well with what’s been done before.

“Previously, measurements of accretion rates have used spectroscopy and have been dependent on white dwarf models. These are numerical models that calculate how quickly an element sinks out of the atmosphere into the star, and that tells you how much is falling into the atmosphere as an accretion rate. You can then work backwards and work out how much of an element was in the parent body, whether a planet, moon or asteroid.”

A white dwarf is a star that has burnt up all its fuel and shed its outer layers, potentially destroying or unsettling any orbital bodies in the process. As material from those bodies is pulled into the star at a high enough rate it slams into the surface of the star, forming a shock-heated plasma. This plasma, with a temperature between 100,000 to a million degrees kelvin, then settles on the surface, and as it cools it emits X-rays that can be detected.

X-rays are similar to the light our eyes can see, but have much more energy. They are created by very fast-moving electrons (the outer shells of atoms, which make up all the matter around us). Commonly known for their use in medicine, in astronomy X-rays are the key fingerprint of material raining down on exotic objects such as black holes and neutron stars.

Detecting these X-rays is very challenging as the small amount that reaches Earth can be lost amongst other bright X-ray sources in the sky. So the astronomers took advantage of the Chandra X-ray Observatory, normally used to detect X-rays from black holes and neutron stars that are accreting, to analyse the nearby white dwarf G29–38.

With Chandra’s improved angular resolution over other telescopes they could isolate the target star from other X-ray sources and viewed, for the first time, X-rays from an isolated white dwarf. It confirms decades of observations of material accreting into white dwarfs that have relied upon evidence from spectroscopy.

Dr Cunningham adds: “What’s really exciting about this result is that we’re working at a different wavelength, X-rays, and that allows us to probe a completely different type of physics.

“This detection provides the first direct evidence that white dwarfs are currently accreting the remnants of old planetary systems. Probing accretion in this way provides a new technique by which we can study these systems, offering a glimpse into the likely fate of the thousands of known exoplanetary systems, including our own Solar system.”

Artist’s impression available to download at the link below. Images are free for use if used in direct connection with this story but image copyright and credit must be University of Warwick/Mark Garlick:

The ERC, set up by the European Union in 2007, is the premier European funding organisation for excellent frontier research. It funds creative researchers of any nationality and age, to run projects based across Europe. The ERC offers four core grant schemes: Starting Grants, Consolidator Grants, Advanced Grants and Synergy Grants. With its additional Proof of Concept Grant scheme, the ERC helps grantees to bridge the gap between their pioneering research and early phases of its commercialisation.

The ERC is led by an independent governing body, the Scientific Council. Since 1 November 2021, Maria Leptin is the new President of the ERC. The overall ERC budget from 2021 to 2027 is more than €16 billion, as part of the Horizon Europe programme, under the responsibility of the European Commissioner for Innovation, Research, Culture, Education and Youth, Mariya Gabriel.