Initial release of findings from involving more than 100,000 participants around the global reveals important cross-country differences on how citizens prepare and cope with the Coronavirus (COVID-19) and may help inform governments in their decision-making

An international and interdisciplinary team of researchers from twelve different academic institutions, including Warwick, IESE, the Massachusetts Institute of Technology, Cambridge and Oxford, among others, is collecting survey data on how citizens perceive and cope with the spreading coronavirus. 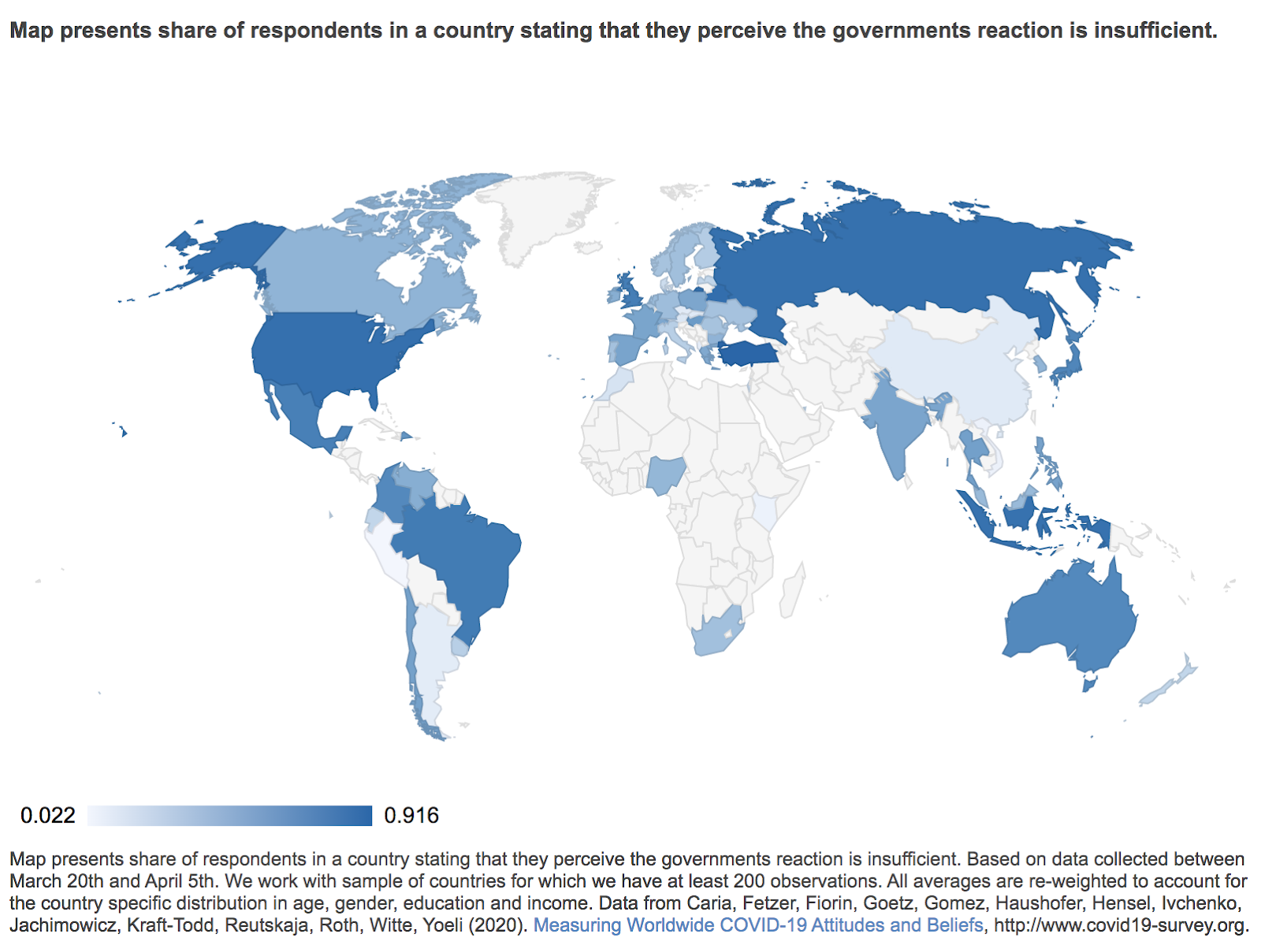 The International Survey on Coronavirus (https://covid19-survey.org/) features questions on steps the survey participant is taking to protect themselves, their thoughts on potential policies and regulations, their perception of social norms, and how they think their country is responding to the crisis. Participation is open to anybody aged above 18 as an open access citizen science project guided by a broad team of interdisciplinary academics. The survey was launched on Friday, March 20, and in less than two weeks has already received over 110,000 responses from more than 160 countries. The survey is currently available in 69 languages, with more being added. All data will be shared publicly, with results updated on the website on an ongoing basis.

The first batch of aggregated results have just been made publicly available, highlighting the variety in adherence that citizens around the world are taking to combat COVID-19. They also reveal the widespread dissatisfaction citizens express with governments around the world, with important differences by country. For example, in the five countries with the highest numbers of reported cases so far, at the time of the survey the percentage of respondents who thought that their governments’ reaction was insufficient is 10% in China, 27% in Italy, 37% in Germany, 53% in Spain, and 85% in the US. The samples are not nationally representative per se. Nevertheless, for a few countries, data on representative samples has been collected which suggest that the differences between the snowball samples and representative samples are quite small. Further, researchers are taking steps to improve representativeness by using survey weights based on demographic information.

“The pandemic is at different stages around the world, and each government is taking a different approach to addressing it,” said Margarita Gomez, executive director of the People in Government Lab at the Blavatnik School of Government at the University of Oxford. “Our study aims to shed insight into how people think, believe, feel, and perceive how effective the response is to the COVID-19 outbreak and crisis, with the aim of informing decision-makers around the world on how to formulate their strategies."

"I believe that large-scale data like what we are compiling can tell us a lot about individual differences in behaviors and perceptions,” added Elena Reutskaja, associate professor of marketing at IESE Business School. “Who is most likely to comply with recommendations and regulations? Who is least likely to do so?”

Unique to this project is the global focus, which allows the interdisciplinary research team to capture how citizens respond to changing government recommendations, as Thiemo Fetzer, associate professor of economics at the University of Warwick, notes, “Many governments are currently implementing measures to help contain and slow down the spread of the disease. Understanding how people perceive these policies and whether they intend to comply with them is likely important to be effective in containing the spread.” One particularly interesting observation from our sample so far is that there appears to be significant variation across countries in the extent to which people believe that the government has been truthful in the way it communicates with its citizens about the disease. In the United States, 75% of respondents perceive the government's communication on the disease as untruthful, while in Germany, that share is only 15%. Communication is central to ensure that citizens cooperate in the collective effort to contain and slow down the spread of the virus. Yet, it appears that the government may not be well placed across countries to convey this.

Editable EPS versions and maps to be used for reproduction purposes are made available here https://covid19-survey.org/results/eps/, while a CSV file with the country averages presented visually in the graphs is available: https://bit.ly/34mfPIg.

Any qustions on the survey may be addressed to team@covid19-survey.org