· They spoke of the ‘critical’ role that arts venues, such as Warwick Arts Centre, play in society

· Lucy Neal said: “I think our years here planted all those seeds for us to kind of understand the richness that the theatre world could afford.”

· Rose Fenton commented: “The arts have a really important role to play, the arts and the imagination in imagining new possibilities.” 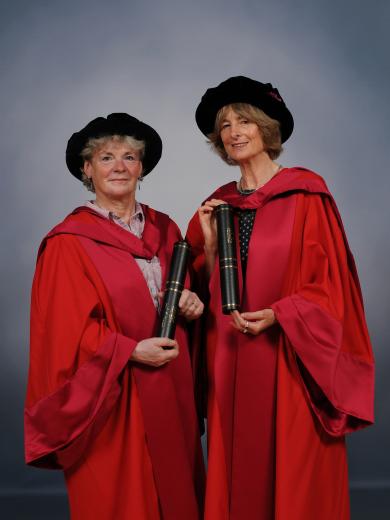 Theatre producers and champions of the arts Lucy Neal and Rose Fenton emphasised the ‘critical’ role of arts venues in society as they were awarded honorary degrees from the University of Warwick this week.

The founders of the London International Festival of Theatre returned to the university that they originally graduated from in the 1970s to receive their Honorary Doctor of Letters degrees during the University of Warwick’s graduation ceremonies on 23 July.

Lucy Neal (pictured, left) graduated from the University of Warwick with a BA English and Italian while Rose Fenton (pictured, right) received a BA English and Drama, both in 1979. Following their graduation, they co-founded LIFT (the London International Festival of Theatre) in 1980 and since then have enjoyed long careers working in the arts. They are among twelve distinguished figures to be honoured by the University alongside graduating students and their families this summer.

Rose Fenton said: “The Arts Centre was our playground. The Arts Centre was where we saw extraordinary theatre from a roll-call of the British alternative theatre, which was breaking barriers, which was questioning the form of theatre. But it was also the place where we gained experience putting on student productions, with the support of an extraordinary professional crew backstage. We learnt about marketing, we learnt about stage management, we learnt about lighting, about box office and budgets. So that was equally important alongside our academic work.”

Lucy Neal said: “I think we were following our noses really. We met here as friends so the [London International Festival of Theatre] grew out of a conversation between friends and not only ourselves, there were quite a number of us here. And Rose and I continued with the idea, which felt so adventurous and exciting, to be exploring the theatre and exploring the world at the same time. I think our years here planted all those seeds for us to kind of understand the richness that the theatre world could afford.”

They also spoke of the ‘critical’ role that arts venues like Warwick Arts Centre play in society.

Rose said: “We live in deeply troubled, uncertain times, with the rise of populism, with climate emergency, so many things which seem to be going off track. The world that we thought we were going into is no longer there. And actually, the arts have a really important role to play, the arts and the imagination in imagining new possibilities.”

Lucy said: “The world is in a very tricky moment where so much we’re imagining has got to happen. It’s possible that we’re not even living on a liveable earth, and so the realm of our imagination and those that are dedicating themselves to creative lives which are full of a world of how the imaginary transforms and renews the real.

“I think they really fed our appetite for the new, the original, the emergent, for the experimental, and we need that now amongst whatever arts subject graduates might be following.”

With Coventry to become City of Culture 2021, Lucy and Rose spoke of the great opportunities that students will have to engage with the arts, and how they should take advantage of them.

Lucy said: “I know they’ve got an environment theme, I know they’ve already got some fantastic people working on the programme so we’ll see what emerges. But I think from Warwick’s perspective it’s superb timing, particularly for those students who might get involved in it. I would urge them to, maybe that would be their playground and seeding. That’s what I feel very grateful to Warwick for.”

Rose said: “Believe in yourself, that you can make a difference. One person at a time can make a difference. Find like-minded collaborators, it’s so much better when you’re working with people who believe in the same things, you can make mistakes together, laugh about it, pick yourself up. Don’t be afraid to ask questions, we can’t know everything. And I think have fun. One of the artists we worked with said ‘fun is a very silly word, but a very productive state’. And good luck, because there’s an awful lot out there to play for in every sense of the word, many opportunities, and you can make a difference.”

Listen to a podcast interview with Rose Fenton and Lucy Neal: https://www.youtube.com/watch?v=jnUytizD2Fg