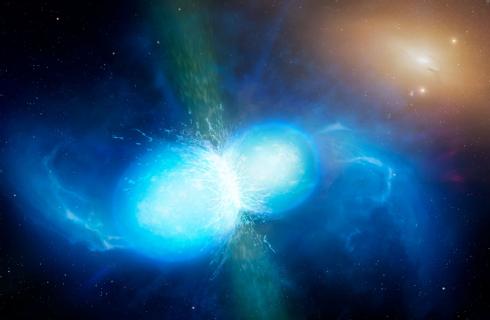 Gold’s origin in the Universe has finally been confirmed, after a gravitational wave source was seen and heard for the first time ever by an international collaboration of researchers, with astronomers at the University of Warwick playing a leading role.

Huge amounts of gold, platinum, uranium and other heavy elements were created in the collision of these compact stellar remnants, and were pumped out into the universe – unlocking the mystery of how gold on wedding rings and jewellery is originally formed.

The collision produced as much gold as the mass of the Earth.

This discovery has also confirmed conclusively that short gamma-ray bursts are directly caused by the merging of two neutron stars.

The neutron stars were very dense - as heavy as our Sun yet only 10 kilometres across – and they collided with each other 130 million years ago, when dinosaurs roamed the Earth, in a relatively old galaxy that was no longer forming many stars.

Their merging sent ripples through the fabric of space and time – and these ripples are the elusive gravitational waves spotted by the astronomers.

The gravitational waves were detected by the Advanced Laser Interferometer Gravitational-Wave Observatory (Adv-LIGO) on 17 August this year, with a short duration gamma-ray burst detected by the Fermi satellite just two seconds later.

This led to a flurry of observations as night fell in Chile, with a first report of a new source from the Swope 1m telescope.

Longstanding collaborators Professor Levan and Professor Nial Tanvir (from the University of Leicester) used the facilities of the European Southern Observatory to pinpoint the source in infrared light.

Professor Levan’s team was the first one to get observations of this new source with the Hubble Space Telescope. It comes from a galaxy called NGC 4993, 130 million light years away.

Andrew Levan, Professor in the Astronomy & Astrophysics group at the University of Warwick, commented: “Once we saw the data, we realised we had caught a new kind of astrophysical object. This ushers in the era of multi-messenger astronomy, it is like being able to see and hear for the first time.”

Dr Joe Lyman, who was observing at the European Southern Observatory at the time was the first to alert the community that the source was unlike any seen before.

He commented: “The exquisite observations obtained in a few days showed we were observing a kilonova, an object whose light is powered by extreme nuclear reactions. This tells us that the heavy elements, like the gold or platinum in jewellery are the cinders, forged in the billion degree remnants of a merging neutron star.”

Dr Samantha Oates added: “This discovery has answered three questions that astronomers have been puzzling for decades: what happens when neutron stars merge? What causes the short duration gamma-ray bursts? Where are the heavy elements, like gold, made? In the space of about a week all three of these mysteries were solved.”

Dr Danny Steeghs said: “This is a new chapter in astrophysics. We hope that in the next few years we will detect many more events like this. Indeed, in Warwick we have just finished building a telescope designed to do just this job, and we expect it to pinpoint these sources in this new era of multi-messenger astronomy”.