Researchers in WMG at the University of Warwick, in collaboration with Imperial College London, have found a way to enhance hybrid flow batteries and their commercial use. The new approach can store electricity in these batteries for very long durations for about a fifth the price of current technologies, with minimal location restraints and zero emissions. 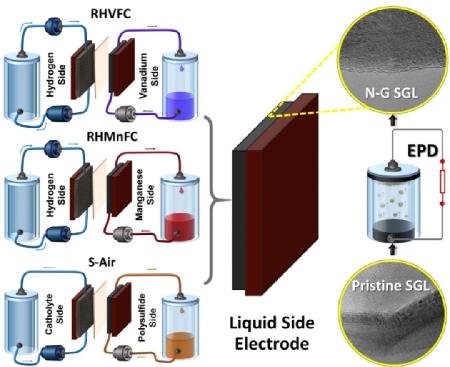 Wind and solar power are increasingly popular sources for renewable energy. Unfortunately, intermittency issues keep them from connecting widely to the National grid. One potential solution to this problem involves in the deployment of long-duration battery technology, such as the redox flow battery. Despite its great promise the current costs of this system are a key determining factor to real-world adoption. An affordable grid battery should cost £75/kWh, according to the US Department of Energy. Lithium-ion batteries, which lead the charge for grid storage, cost about £130/kWh.

Now WMG researchers have found a way of enhancing hybrid flow batteries or regenerative fuel cell (RFC) technology that could store electricity for very long durations for about one-fifth the cost of current storage technologies, with flexibility in siting and with minimal environmental impact. The technology combines carbon-based electrodes with economically sourced electrolytes, (manganese or sulphur, which are abundant chemicals in the planet) by means of a simple and yet highly effective electrophoretic deposition of nano-carbon additives (nitrogen-doped graphene) that enhance the electrode durability and performance significantly in highly acidic or alkaline environments.

The researchers have published their findings in a paper entitled, ‘Hybrid Redox Flow Cells with Enhanced Electrochemical Performance via Binderless and Electrophoretically Deposited Nitrogen-Doped Graphene on Carbon Paper Electrodes’ in the December 2020 edition of the journal ACS Applied Materials & Interfaces.

Dr Barun Chakrabarti, a Research Fellow in WMG at the University of Warwick and one of the lead authors on the paper said:

“This EPD technique is not only simple but also improves the efficiencies of three different economical hybrid flow batteries thereby increasing their potential for widespread commercial adoption for grid-scale energy storage.”

The hybrid flow battery’s total chemical cost is about 1/30th the cost of competing batteries, such as lithium-ion systems. Scaled-up technologies may be used to store electricity from wind or solar power, for multiple days to entire seasons, for about £15 to £20 per kilowatt hour. These batteries are also extremely useful for grid-scale load levelling applications as their design is very flexible due to their unique feature of sizing their power independently of their energy.

The energy density of a hybrid flow battery, especially the polysulphide/air system (S-Air), is 500 times higher than pumped hydroelectric storage. It is also so much more compact and can be placed near any renewable generation.

The full paper with all author details can be found here: Hybrid Redox Flow Cells with Enhanced Electrochemical Performance via Binderless and Electrophoretically Deposited Nitrogen-Doped Graphene on Carbon Paper Electrodes

Background history to this area of research
Development of the EPD technology began in 2013, when Professor Low joined WMG as an Assistant Professor and researched industrial Lithium-ion battery manufacturing processes. EPD involves the migration of electrically charged particles through a fluid that is under the influence of an electric field generated by applying the right potential.

Although EPD is an industrially adopted process such as for depositing industrial coatings onto conductive substrates, its mass-scale adoption for energy storage applications has only recently seen some success. Supported by EPSRC’s First Grant (EP/P026818/1, https://gtr.ukri.org/projects?ref=EP%2FP026818%2F1) and Industrial Strategy Challenge Fund on battery and supercapacitor manufacturing (EP/R023034/1, https://gtr.ukri.org/projects?ref=EP%2FR023034%2F1), Low’s research team have developed EPD for preparing lithium-ion battery electrodes that meet industrial standards for thickness and mass loadings and published their finding in ‘Batteries and Supercaps’ (https://chemistry-europe.onlinelibrary.wiley.com/doi/full/10.1002/batt.201900017). They have also produced carbon electrodes with nanomaterials for improving the practical performance of vanadium-based flow batteries using deep eutectic solvent electrolytes, and published their finding in ‘Batteries’ (https://www.mdpi.com/2313-0105/6/3/38).