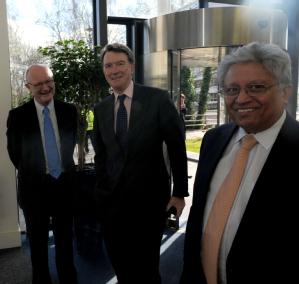 The Midlands has been designated a new Low Carbon Economic Area (LCEA) and is to receive £19 million of government funding for research into and development of low carbon vehicles. The news was announced today, Thursday 11th February 2010,  by Business Secretary Lord Mandelson, in a special visit to the University of Warwick’s Warwick Manufacturing Group (WMG).

Following a tour of low carbon automotive research projects in WMG’s International Manufacturing Centre and the International Digital Laboratory, Lord Mandelson gave a short speech in which he said:

“I want to see the Midlands help the UK to lead the global automotive industry in the transition from conventional to low carbon vehicle technologies. The LCEA will send a clear signal to the global market about the Midlands’ strengths in advanced automotive engineering.

“The move towards a low carbon economy presents huge opportunities. This new funding will help secure the Midlands’ 10,000 existing car industry jobs, by helping transform them into the green car jobs of the future.”

Lord Mandelson also used the opportunity of his speech to congratulate WMG and the University of Warwick on their recent award of a Queens Anniversary Prize for education. He then further praised the University for winning 60 graduate internships in a joint Federation of Small Businesses/HEFCE initiative also just announced today.

“The car industry is facing huge challenges over the next decade. From emissions, the environment to safety engineering, a new generation of hi-tech but low carbon cars will be required. Today’s announcement is a crucial and most welcome government investment in low carbon automotive engineering which will help companies meet these global needs and provide them with new opportunities to grow as the world emerges from recession.”

“This is great news and reflects the real strengths of the West and East Midlands regions in automotive manufacturing. Becoming a Low Carbon Economic Area will reinforce our growing reputation as globally competitive regions, which continue to develop cutting-edge green technologies and high technology industries upon which the future prosperity of all UK regions will depend.”

“This latest announcement follows Advantage West Midlands’s central role in coordinating a successful bid to the new European Institute of Innovation and Technology (EIT), which will see a unique consortium of six European regions, including the West Midlands, five of Europe’s top universities and ten major companies deliver Europe’s trail-blazer on climate change – the €750million Knowledge and Innovation Community, known as ‘Climate KIC’.

“That success is further testament to our growing reputation for promoting innovation and excellence in the emerging low-carbon and green technologies and helping the region to become a centre of excellence.

“It is now more important than ever that we continue to make every pound count and achieve maximum impact through our strategic interventions.”

“Advanced automotive engineering and low carbon technologies are extremely important to the future prosperity of the Midlands’ and UK economy.

“Today’s announcement is fantastic news for the two Midlands regions and will provide a huge boost to the competitiveness and innovation of our companies, large and small.”

“Establishing the region as a Low Carbon Economic Area will further strengthen the Midlands’ role at the heart of the UK’s automotive engineering sector.

“By providing the environment for businesses in this sector to develop and implement new, low-carbon ideas, we will ensure that Midlands-based companies remain at the cutting edge of new technologies, creating skilled, green jobs and bringing additional wealth to the region.”

“Automotive manufacturing is vitally important to the Midlands’ economy and this announcement is fantastic news. The East and West Midlands share a rich industrial heritage and through the Low Carbon Economic Area, we will continue to nurture the innovation of our companies to ensure that we prosper in a new global low carbon economy.

“It means that our automotive businesses will be able to access world class facilities and the expertise of our excellent universities leading to the development of new low carbon transport technologies. In the East Midlands, the Low Carbon Economic Area will link with the work that we are already doing through our unique transport innovation network (iNet) which is driving forward innovations in the transport equipment market.”

3. Advantage West Midlands will invest £9.5 million into the LCVTP combined with £9.5 million European funds, and more than £10 million of industry funds.

4. In the East Midlands, the transport equipment sector includes a diverse range of specialist SMEs and large companies like Rolls Royce, Toyota and Bombardier, contributing £2.5 billion to the economy and employing over 38,000 people.

5. The West Midlands region alone accounts for over 60 per cent of the UK research and development in the automotive sector, with companies such as Jaguar Land Rover, Tata Motors, Shanghai Automotive, SAIC and Ricardo spending in excess of £650million.

7. In addition, emda is also supporting a £9 million Transport Innovation Network (iNet) which brings together businesses, universities and the public sector with common areas of interest, innovation expertise and capability within the automotive, aerospace, marine, motorsport and rail market sectors.

8. The Department for Business, Innovation and Skills, has announced four Low Carbon Economic Areas (LCEA). These are: