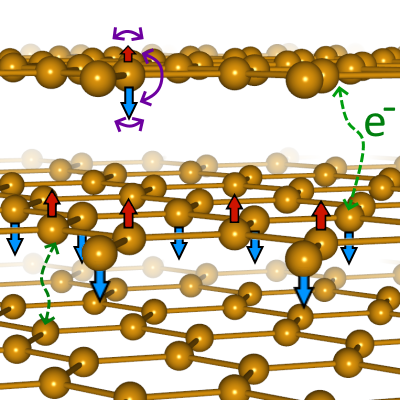 Researchers have identified a new form of magnetism in so-called magnetic graphene, which could point the way toward understanding superconductivity in this unusual type of material.

The researchers, led by Dr Matthew Coak of the University of Warwick, were able to control the conductivity and magnetism of iron thiophosphate (FePS3), a two-dimensional material which undergoes a transition from an insulator to a metal when compressed. This class of magnetic materials offers new routes to understanding the physics of new magnetic states and superconductivity.

Using new high-pressure techniques, the researchers have shown what happens to magnetic graphene during the transition from insulator to conductor and into its unconventional metallic state, realised only under ultra-high pressure conditions. When the material becomes metallic, it remains magnetic, which is contrary to previous results and provides clues as to how the electrical conduction in the metallic phase works. The newly discovered high-pressure magnetic phase likely forms a precursor to superconductivity so understanding its mechanisms is vital.

Their results, published in the journal Physical Review X, also suggest a way that new materials could be engineered to have combined conduction and magnetic properties, which could be useful in the development of new technologies such as spintronics, which could transform the way in which computers process information.

Properties of matter can alter dramatically with changing dimensionality. For example, graphene, carbon nanotubes, graphite and diamond are all made of carbon atoms, but have very different properties due to their different structure and dimensionality.

“But imagine if you were also able to change all of these properties by adding magnetism,” said first author Dr Matthew Coak, who is jointly based at the University of Warwick Department of Physics and Cambridge’s Cavendish Laboratory. “A material which could be mechanically flexible and form a new kind of circuit to store information and perform computation. This is why these materials are so interesting, and because they drastically change their properties when put under pressure so we can control their behaviour.”

In a previous study by Sebastian Haines of the Cavendish Laboratory and the Department of Earth Sciences, researchers established that the material becomes a metal at high pressure, and outlined how the crystal structure and arrangement of atoms in the layers of this 2D material change through the transition.

“The missing piece has remained however, the magnetism,” said Coak. “With no experimental techniques able to probe the signatures of magnetism in this material at pressures this high, our international team had to develop and test our own new techniques to make it possible.”

The researchers used new techniques to measure the magnetic structure up to record-breaking high pressures, using specially designed diamond anvils and neutrons to act as the probe of magnetism. They were then able to follow the evolution of the magnetism into the metallic state.

“To our surprise, we found that the magnetism survives and is in some ways strengthened,” co-author Dr Siddharth Saxena, group leader at the Cavendish Laboratory. “This is unexpected, as the newly-freely-roaming electrons in a newly conducting material can no longer be locked to their parent iron atoms, generating magnetic moments there - unless the conduction is coming from an unexpected source.”

In their previous paper, the researchers showed these electrons were ‘frozen’ in a sense. But when they made them flow or move, they started interacting more and more. The magnetism survives, but gets modified into new forms, giving rise to new quantum properties in a new type of magnetic metal.

How a material behaves, whether conductor or insulator, is mostly based on how the electrons, or charge, move around. However, the ‘spin’ of the electrons has been shown to be the source of magnetism. Spin makes electrons behave a bit like tiny bar magnets and point a certain way. Magnetism from the arrangement of electron spins is used in most memory devices: harnessing and controlling it is important for developing new technologies such as spintronics, which could transform the way in which computers process information.

“The combination of the two, the charge and the spin, is key to how this material behaves,” said co-author Dr David Jarvis from the Institut Laue-Langevin, France, who carried out this work as the basis of his PhD studies at the Cavendish Laboratory. “Finding this sort of quantum multi-functionality is another leap forward in the study of these materials.”

“We don’t know exactly what’s happening at the quantum level, but at the same time, we can manipulate it,” said Saxena. “It’s like those famous ‘unknown unknowns’: we’ve opened up a new door to properties of quantum information, but we don’t yet know what those properties might be.”

There are more potential chemical compounds to synthesise than could ever be fully explored and characterised. But by carefully selecting and tuning materials with special properties, it is possible to show the way towards the creation of compounds and systems, but without having to apply huge amounts of pressure.

Additionally, gaining fundamental understanding of phenomena such as low-dimensional magnetism and superconductivity allows researchers to make the next leaps in materials science and engineering, with particular potential in energy efficiency, generation and storage.

As for the case of magnetic graphene, the researchers next plan to continue the search for superconductivity within this unique material. “Now that we have some idea what happens to this material at high pressure, we can make some predictions about what might happen if we try to tune its properties through adding free electrons by compressing it further,” said Coak.

“The thing we’re chasing is superconductivity,” said Saxena. “If we can find a type of superconductivity that’s related to magnetism in a two-dimensional material, it could give us a shot at solving a problem that’s gone back decades.”