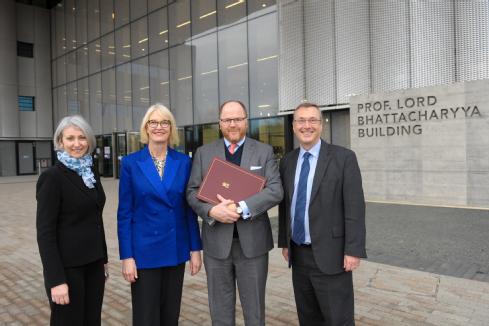 The University of Warwick was today, 2nd February, pleased to welcome George Freeman MP, Minister for Science, Research and Innovation, to visit the Professor Lord Bhattacharyya Building, home to the National Automotive Innovation Centre, following a visit to the UK Battery Industrialisation Centre.

During his visit Mr Freeman met with researchers from WMG conducting pioneering research into battery innovation, and their integration and control for propulsion and energy applications, and attended a demonstration of WMG’s autonomous vehicle 3DX simulator to learn more about Warwick’s work in the development of new transport technologies.

Mr Freeman’s visit coincides with the publishing of the government’s white paper on Levelling Up.

“On the day of the launch of the government’s Levelling Up white paper, it has been a privilege to welcome the Minister for Science, Research and Innovation to Warwick and to highlight some of the many projects the University is undertaking that will support levelling up across our region.

“Through sustainable transport and technologies, life sciences, and as the home of the National Automotive Innovation Centre and as a partner in the UK Battery Industrialisation Centre – Warwick’s contribution to the levelling up work across the West Midlands will be a significant feature of our University’s future, with the energy and drive of our innovation at the fore.”

Commenting on their visit to the University of Warwick Campus and UKBIC, George Freeman MP said:

“It was fantastic to visit the University of Warwick manufacturing cluster, a globally renowned centre for research & innovation in propulsion, battery tech, robotics, and life sciences.

“As part of our mission to Level Up the UK, today we pledged to spend over half the government’s R&D budget outside the South East of England by 2024-25, piloting new Innovation Accelerators to give three regions – including the West Midlands - access to £100 million of new funding.

“This is what Levelling Up looks like in practice - growing the economy while ensuring we can all share in our country’s success.”

Commenting on the minister’s visit to Warwick and the government’s commitment to increase publically funded research Executive Chair of WMG at the University of Warwick, Margot James, said:

“I am delighted to welcome George Freeman, Science Minister, to WMG today, we are proud that the Minister has chosen WMG at the University of Warwick to showcase his launch of the innovation accelerators. I welcome wholeheartedly the commitment within the Levelling Up white paper to an increase of 40% in publicly funded research across the Midlands.”

The £130 million UK Battery Industrialisation Centre (UKBIC) is a pioneering 18,500 square metre state-of-the-art national facility, which has been developed to support UK industry with development of battery technologies for future electrification. UKBIC presents an opportunity for UK technology developers to prove out their innovations and processes by acting as the bridge between new battery chemistries developed in the research laboratories and mass scale production for the automotive market in Gigafactories.

The National Automotive Innovation Centre is a partnership between WMG, at the University of Warwick, Jaguar Land Rover, and Tata Motors European Technical Centre. There are over 1,000 designers, engineers and researchers located within the Centre, working on a range of future vehicle and mobility solution projects. Students and apprentices also share the space working alongside staff as our future designers and engineers.

Further to Warwick’s role in developing battery and transport technology, the University is supporting an extensive range of activities to support growth, investment, and regeneration in the West Midlands; including as a Principal Partner of Coventry UK City of Culture 2022, which has to secured £172.6m of investment into the city and over £500m of city regeneration activity. WMG’s new Skills Centre and National Electrification Skills Framework will also support high quality skills development.