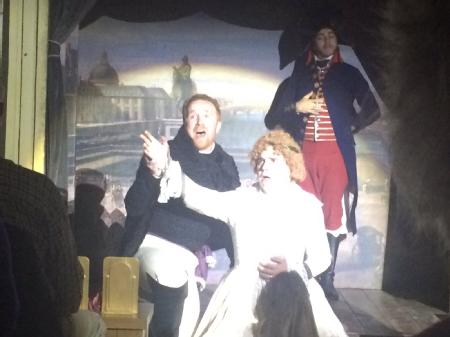 A new permanent exhibition on Napoleonic prisoners and the theatre they built has been launched Portchester Castle, Hampshire with help from researchers at the University of Warwick – with scenes of an authentic play staged by the prisoners to be performed on the 5-6th August.

Led by Dr Katherine Astbury, the University of Warwick researchers, including PhD student Devon Cox, have been exploring the theatrical endeavours of a group of French prisoners of war who were captured in Spain in 1807 during the Peninsular War.

At first housed in prison hulks off Cadiz, the prisoners were then transferred to the desert island of Cabrera before being transported to Portchester Castle in 1810, with those in charge of the prison supporting their theatrical endeavours and providing the wood needed to build a full working theatre in the castle’s keep.

The theatre was constructed under the direction of Jean-François Carré, who had been a professional stage technician in Paris– and saw productions of both hit plays of the time by Guilbert de Pixerécourt and original plays, including the melodrama Roseliska which was recently restaged at the castle with further performances on 5-6th August.

The prison theatre garnered contemporary praise, with in January 1811 the Hampshire Telegraph and Sussex Chronicle reporting:

“The French Prisoners at Portchester have fitted up a Theatre in the Castle, which they have decorated in a style far surpassing anything of the kind that could possibly be expected […] It is no exaggeration of their merit to say, that the Pantomimes which they have brought forward, are not excelled by those performed in London.” 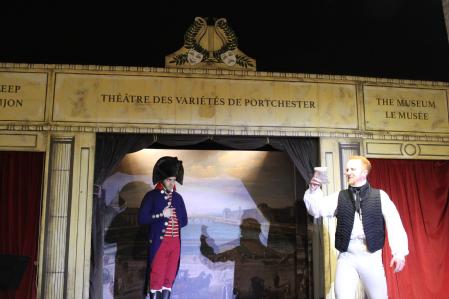 “Amazingly the manuscript of a three-act melodrama written and performed by some of the French prisoners has survived and it gives us unique insight into the hopes and fears of those held at Portchester. At a time when Britain and France were at war, they wanted to dazzle the locals with highly ambitious productions showcasing French theatrical practice.

“Over the last four years my research team has been exploring the complex interplay of aesthetics and politics in French theatre during the Napoleonic period. A public performance of one of the prisoners’ plays is the logical conclusion to the project. We’ve even been able to create an authentic score for Roseliska from music published by the prisoners’ musical director Marc-Antoine Corret on his return to France.

“Parisian theatre of the Napoleonic Era was dominated by melodrama which aimed for maximum emotional effect – there was a sense that because of the French Revolution people needed something strong to move them after all they’d experienced in real life. It was a theatrical form of grand spectacle with elaborate scenery and stage effects, extended dance and fight scenes. “

Although the play text has survived, the original score has not. Dr Diane Tisdall, music director and AHRC Postdoctoral Research Fellow at the University of Warwick, has though created a score using Parisian melodrama manuscripts of the period and music by Marc-Antoine Corret, musical director for the prisoners’ theatre troop and Paris Conservatoire-trained horn player.