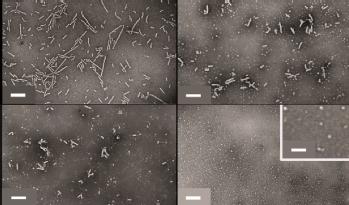 More efficient medical treatments could be developed thanks to a new method for triggering the rearrangement of chemical particles.

The new method, developed at the University of Warwick, uses two ‘parent’ nanoparticles that are designed to interact only when in proximity to each other and trigger the release of drug molecules contained within both.

The researchers, led by Professors Andrew Dove and Rachel O’Reilly, suggest that this new mechanism could potentially limit side-effects by only releasing the drug where required:

“We conceive that in the blood stream the particles would not be able to interact sufficiently to lead to release, only when they are taken into cells would the release be able to happen”, says Professor Dove. “In this way, the drug can be targeted to only release where we want it to and therefore be more effective and reduce side effects”.

The chemical composition of the two ‘parent’ nanoparticles is crucial to the new method. Professor Dove explains:

“The two ‘parent’ nanoparticles used in the new mechanism are cylindrical in shape and are made from polymer chains that differ only by the way in which chemical bonds are directed within a part of the structure.

“When the two ‘parent’ nanoparticles are in close enough proximity the polymer chains are driven to come together to form a new ‘daughter’ nanoparticle by a phenomenon known as stereocomplexation.

“In the process of this rearrangement, we propose that any molecules, such as drug molecules, that are encapsulated within the parent particles will be released.”

Published in journal Nature Communications the research, Structural reorganisation of cylindrical nanoparticles triggered by polylactide stereocomplexation, could “raise new possibilities in how we can administer medical treatments”, says Professor Dove. “We’re planning to study this as a new treatment for cancer but the principle could potentially be applied to a wide range of diseases.”