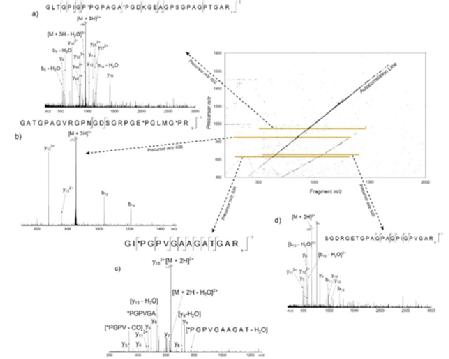 A new test for detecting biomarkers for cancer and diabetes is more than 1000x more detailed and 100% faster than existing methods, new research by the University of Warwick suggests.

Developed to undertake a detailed study of collagen, the researchers argue that the same methodology can be used with any protein-based sample and is currently being tested with cancer cells and proteins relevant to Type II diabetes.

Named 2D Mass Spectrometry (2DMS), the test provides a new tool in the rapidly expanding field research into the structure and function of proteins; Proteomics.

Led by the O’Connor Research Group in the University of Warwick’s Department of Chemistry, the researchers found that the large protein collagen can be sliced into smaller fragments and analysed by multidimensional mass spectrometry to yield data which is 1000x more detailed than previously possible with mass spectrometry, and 100% faster than analysing the same sample by existing techniques.

Commenting on 2DMS and its potential Professor Peter O’Connor, of the University of Warwick’s department of Chemistry and leader of the O’Connor Group, said:

“Within each and every cancer cell there are at least a million peptides comprising the protein machines that enable the cell to function. Understanding the structure and chemistry of all peptides and proteins will enable ground-breaking treatments to be developed, with 2DMS providing a new tool for studying them in far greater detail than before”.

2DMS was inspired by tools from the field of nuclear magnetic resonance whereby signals are spread out on a multidimensional canvas, by modulating particular signals in the sample and then tracing those modulation frequencies in the final signal. Professor O’Connor explains:

“The 2DMS method modulates ion signal intensities in a way which carries over into fragment ion signals, and therefore allows the researchers to correlate individual fragment ion signals with their precursor ion – effectively allowing sequencing of each molecule in the sample simultaneously.

“Since collagen has more than 400 individual peptide signals and whole cells have tens of thousands, this method saves a huge amount of time because there is no need to individually isolate and fragment each one serially; they are all fragmented together in parallel, and the data can be then extracted into individual fragment scans.”

This application of 2DMS originates in the undergraduate thesis project of University of Warwick Chemistry student Hayley Simon. Initially aiming to find all the known crosslinks in collagen she ran into difficulty in processing the data due to the need to isolate each of the >400 precursor peptide ions and sequence them individually. Ms. Simon then decided to try the new 2DMS technique and managed to achieve a remarkable level of separation and very detailed information.

“When studied by mass spectrometry, many species in the digested collagen sample appear similar. Disentangling this data, while accounting for multiple possible explanations, presented us with a significant challenge. Usually, the separation of species like this would not be possible without running many experiments. By using 2DMS, we were able to collect information about everything we observed in the collagen sample, performing just one experiment. After processing, the results are presented as a single spectrum, allowing patterns to be easily recognised. This helps identify components in the sample, which in turn can be used to determine structural information about the protein.”

The research, Uncoiling collagen: a multidimensional mass spectrometry study, is published by Analyst.