· More than 3 million deaths every year are related to alcohol use globally, according to the World Health Organisation

The physical origin of alcohol addiction has been located in a network of the human brain that regulates our response to danger, according to a team of British and Chinese researchers, co-led by the University of Warwick, the University of Cambridge, and Fudan University in Shanghai. 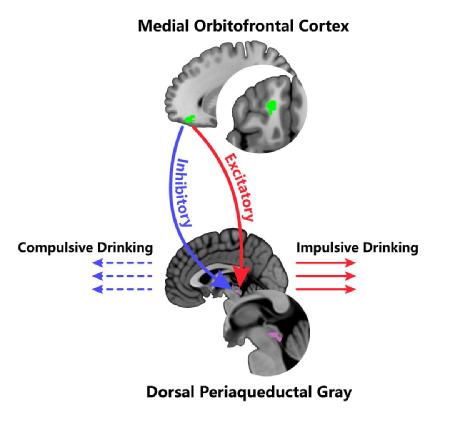 The medial orbitofrontal cortex (mOFC) at the front of the brain senses an unpleasant or emergency situation, and then sends this information to the dorsal periaqueductal gray (dPAG) at the brain's core, the latter area processing whether we need to escape the situation.

A person is at greater risk of developing alcohol use disorders when this information pathway is imbalanced in the following two ways:

· Alcohol inhibits the dPAG (the area of the brain that processes adverse situations), so that the brain cannot respond to negative signals, or the need to escape from danger — leading a person to only feel the benefits of drinking alcohol, and not its harmful side effects. This is a possible cause of compulsive drinking.

· A person with alcohol addiction will also generally have an over-excited dPAG, making them feel that they are in an adverse or unpleasant situation they wish to escape, and they will urgently turn to alcohol to do so. This is the cause of impulsive drinking.

Professor Jianfeng Feng, from the Department of Computer Science at the University of Warwick and who also teaches at Fudan University, comments:
“I was invited to comment on a previous study on mice for the similar purpose: to locate the possible origins of alcohol abuse. It is exciting that we can replicate these murine models in humans, and, of course, go a step further to identify a dual-pathway model that links alcohol abuse to a tendency to exhibit impulsive behaviour.”

Professor Trevor Robbins from the Dept of Psychology at the University of Cambridge comments: "It is remarkable that these neural systems in the mouse concerned with responding to threat and punishment have been shown to be relevant to our understanding of the factors leading to alcohol abuse in adolescents."

Dr Tianye Jia from the Institute of Science and Technology for Brain-inspired Intelligence at Fudan University, also affiliated with King's College London, comments
"We have found that the same neural top-down regulation could malfunction in two completely different ways, yet leading to similar alcohol abuse behaviour."

The research team had noticed that previous rodent models showed that the mPFC and dPAG brain areas could underlie precursors of alcohol dependence.

They then analysed MRI brain scans from the IMAGEN dataset — a group of 2000 individuals from the UK, Germany, France and Ireland who take part in scientific research to advance knowledge of how biological, psychological and environmental factors during adolescence may influence brain development and mental health.

The participants undertook task-based functional MRI scans, and when they did not receive rewards in the tasks (which produced negative feelings of punishment), regulation between the mOFC and dPAG was inhibited more highly in participants who had exhibited alcohol abuse.

Equally, in a resting state, participants who demonstrated a more overexcited regulation pathway between the mOFC and dPAG, (leading to feelings of needing urgently to escape a situation), also had increased levels of alcohol abuse.

Alcohol use disorder (AUD) is one of the most common and severe mental illnesses. According to a WHO report in 2018, more than 3 million deaths every year are related to alcohol use worldwide, and harmful alcohol use contributes to 5.1% of the global burden of disease. Understanding how alcohol addiction forms in the human brain could lead to more effective interventions to tackle the global problem of alcohol abuse.

Paper available to view on request.