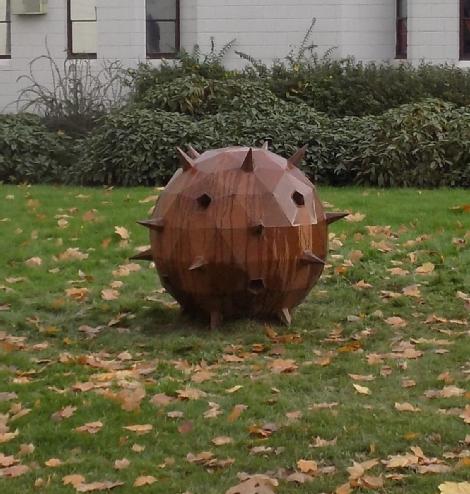 An exciting addition to the University of Warwick’s sculpture collection has arrived on campus; Pollen Bomb by Joanne Risley - thanks to the generous support of award winning producer, director and Alumnus of the University, Lawrence Till.

Lawrence has been an enthusiastic advocate for the collection since his time spent studying here for a BA in English and Theatre Studies 1982 -1985. He has directed hundreds of plays, been the Artistic Director of two major regional theatres and produced and directed dramas seen all over the world, including the multi award-winning series Shameless.

The sculpture, made of corten steel, Pollen Bomb has been installed in the Chaplaincy garden, and is is a geodesic sphere based on the magnification of a grain of pollen.

Commenting on her work, Joanne said:

“Pollen Bomb was the first of three large forms I have created which are derived from botany and biology but fabricated using multiple geometric shapes to create strange otherworldly objects reminiscent of munitions and spacecraft. My intention was to reflect some of the anxiety I feel about the times we live in and the uncertainty about the future. I am reminded of Pandora’s Box; the lid has been opened and chaos unleased.

“The unchecked rise and reach of social media means we live in a world where we must constantly question the sources of the information we receive and be alert to how social media can be manipulated to subvert democracy in a post truth age. My current work explores this state of increased suspicion and sense of the invisible enemy in our midst.”

Commenting on his support for the University of Warwick’s art collection Lawrence Till said:

“The University of Warwick Art Collection had a great influence on me during my time at Warwick studying English & Theatre Studies. Whenever I return to campus I enjoy revisiting pieces of the collection.

“As I take stock of what has changed in my life I am comforted by the fact that these pieces, sculptures and artworks, have remained the same. They are also a glorious reminder of what an inspiring place the University of Warwick is.”

Pollen Bomb joins the diverse range of sculptures available to enjoy and experience throughout Warwick’s central campus, which includes works by Richard Deacon, Atsuo Okamoto, David Nash, Laura Ellen Bacon, which was recently featured on the BBC’s Countryfile, and until October 2020 works by Jake and Dinos Chapman.

Commenting on the collection and addition of Pollen Bomb, Sarah Shalgosky, Curator of the University of Warwick Art Collection said:

“The University of Warwick Sculpture Park goes from strength to strength with lots of school visits during the week and visits by local people at the weekend. I am very grateful to Laurence Till for his support of this work that engages with so many ideas about the natural world and the world that we inhabit.”