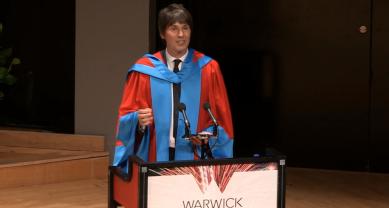 Professor Brian Cox OBE has hailed the vital role of universities in communicating science to the general public as he was awarded an honorary degree at the University of Warwick, the host for this year’s British Science Festival.

He made his remarks as he received an Honorary Doctor of Science degree from the University of Warwick today (18 January).

Professor Cox is a familiar face from a vast array of popular science programmes and documentaries on television and radio, with Wonders of the Solar System, Wonders of the Universe and Wonders of Life on BBC Two, and The Infinite Monkey Cage on BBC Radio 4 among those he has presented. He has made appearances on astronomy programmes The Sky at Night and Stargazing:Live, as well as the panel shows QI.

In being awarded his honorary degree, Professor Cox expressed his appreciation of the recognition of his public outreach work.

He said: “It matters a great deal. When you’re an academic, there are several things that you do – you do research, you do teaching, you do admin at the University. But there is also public outreach, as another strand to your career. I think historically it’s been frowned upon in part, but less so now I think, because now we recognise as universities that we are not only a vital part of society, but society needs to understand what role we play and what we do.

“To be recognised with an honorary doctorate is a great honour for a university to bestow, is a wonderful thing for me personally.” 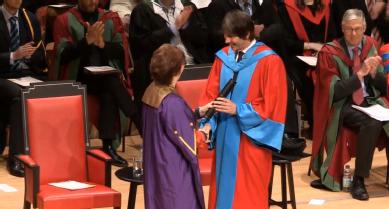 He has won a number of awards for his efforts to popularise science, and spoke of the opportunity that Warwick will have to reach new audiences for its work through the British Science Festival which it will host from 10–13 September.

“The key thing about science festivals is that you bring people into the university environment that have never been there before. And the most important thing is to make them feel welcome and excited and interested. Universities are tremendously valuable public resources and the more people that can access them, the better it is.

“I do think that with massive events like the British Science Festival, the University can learn from that because you can learn who is accessing the resource and who isn’t.”

Professor Cox also gave his congratulations to graduands receiving their degrees alongside him:

“You can be at once reassuring and inspiring by saying you’ve done something really difficult, and you’re also prepared to do something even more difficult if you want!”