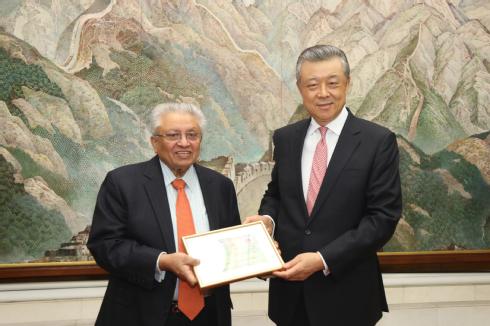 Professor Lord Bhattacharyya, Chairman and founder of WMG, at the University of Warwick, has been honoured by the presentation of a China Talent Visa (R), in recognition of his high-level expertise in manufacturing and inward investment and sustained interaction with the People’s Republic of China.

The China Talent Visa (R) was presented to Professor Lord Bhattacharyya by the Chinese Ambassador to the UK, His Excellency, Ambassador Liu Xiaoming, in a special ceremony at the Chinese Embassy in London on Tuesday 3rd April.

Professor Lord Bhattacharyya is one of the first recipients globally of the newly introduced R Visas for foreign talents awarded by the Chinese government. He has been awarded a ten-year visa.. This follows Professor Lord Bhattacharyya receiving two prestigious awards from China last year– the Great Wall Friendship Award, from Beijing Municipal Government, and the Chinese Government Friendship Award, the premier national award, presented by the Vice-Premier at a special ceremony in Beijing on the occasion of the National Day.

The Chinese government, with this visa, has shown its sincerity towards global talent. It is awarded to foreign high-level personnel, and much-needed highly talented people, whose skills are in urgent demand to help the development of the economy and society of China.

Beijing City University made the application to the Beijing State Administration of Foreign Experts Affairs and the SAFEA London office gave valuable assistance in making all the arrangements with the Embassy.

Professor Lord Bhattacharyya said “I am honoured to have been recognised by the Chinese government, again, for the contribution that they feel that I can continue to make to the development of China.”

H.E. Ambassador Liu Xiaoming said “This is a great day and I am honoured to be presenting you with this Visa today. It is important for the Chinese Government to forge relationships with British scientists and reflects our commitment to innovation. I appreciate your contribution to promoting collaboration in China and look forward to more years of development.”