· Dr Juie Shetye from the University of Warwick: “We are at the start of an exciting journey that will unravel the new magnetic entanglements of the Sun.” 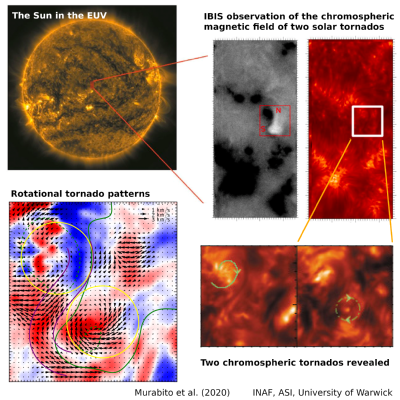 The first direct measurements of the magnetic field in the chromosphere of the Sun by a team including University of Warwick physicists has provided the first observational evidence that huge tornadoes in our Sun’s atmosphere are produced by swirling magnetic fields.

Rotational motion is prevalent in nature, from maelstroms in rivers, airplane turbulence, to weather tornados and cyclones. In the universe, we find rotation in the vortices in atmosphere of Jupiter, in accretion disks of stars and in spiral galaxies.

The constant motions of the Sun’s surface creates giant tornados in the chromosphere, an atmospheric layer that is named after its red colour seen during total solar eclipses. The tornados are a few thousand kilometers in diameter, and like their namesakes on Earth they carry mass and energy high up into the atmosphere. They are therefore keenly studied as energy channels to explain the extraordinary heating of the solar corona.

In a study to be published in the Astronomy & Astrophysics journal, a team of collaborators from the Italian National Institute for Astrophysics (INAF), the University of Warwick and the Italian Space Agency (ASI) have achieved the first three-dimensional tomography of the magnetic fields spiraling in a solar tornado and have measured their faint polarimetric signals. This breakthrough was made possible thanks to outstanding measurements taken with the INAF IBIS instrument (Interferometric Bidimensional Spectrometer) at the DST solar telescope in New Mexico (USA).

Dr Juie Shetye from the Centre for Fusion, Space and Astrophysics at the University of Warwick hails the identification of twisted magnetic fields in such tornadoes as a breakthrough. Dr Shetye said: “Direct measurements of the magnetic field in the chromosphere of the Sun has so far been elusive and this study is opening the door to a new era of solar research. Additionally, solar research is heading into a new epoch of solar observations with opening of next generation telescopes such as the 4-meter Daniel K. Inouye Solar Telescope in Hawaii, in which the UK and the University of Warwick is participating. This telescope will allow solar physicists, to resolve magnetic fields at local county level. We are at the start of an exciting journey that will unravel the new magnetic entanglements of the Sun.”

The University of Warwick’s Dr Erwin Verwichte’s sophisticated analytical methods were used to investigate the fundamental nature of these waves. Dr Verwichte explains: “These chromospheric tornados are natural laboratories for studying the propagation of waves and the energy they carry into the corona. Our study reveals that phase patterns of sound waves in the tornado can mimic rotation and need to be accounted for when measuring the strength of solar tornados.”

“Since their discovery in 2011, the numerical simulations have suggested that the rotating structures observed in the solar chromosphere are tracers of magnetic structures that by their rotation force the solar plasma to move upwards along the magnetic field lines through centrifugal forces.” Said Mariarita Murabito, researcher at Rome-INAF.

“This plasma flow can be accelerated towards the overlying layers of the Sun’s atmosphere. There were however no observational evidences of these processes. Confirming the magnetic nature of solar tornadoes is an important knowledge step.”

"The study of the transport and dissipation of energy in the Sun's atmosphere is of fundamental importance for understanding the heating mechanisms of the outer regions of the Sun and the acceleration of the solar wind." Said Marco Stangalini (ASI) of the research team. "The magnetic fields swirling in these vortices represent the ideal physical conditions for the excitation of magnetic waves, which are considered to be one of the main players in the heating of the solar corona and in accelerating the solar wind. It is the first time that, thanks to high resolution spectropolarimetric IBIS data, it was achieved the three-dimensional tomography of the magnetic fields in these structures.” Remarks Stangalini.

The observations performed with IBIS over the past years have advanced our knowledge of the solar atmosphere, in particular of the structure and dynamics of the chromosphere, of the evolution of magnetic elements at small and large scales, and of the excitation and propagation of waves in magnetic regions.” Comments Ilaria Ermolli (INAF). "A team of researchers and technologists of various INAF institutes and Universities is working to update the instrument, in order to operate it soon to get new observations of the Sun’s atmosphere with the resolution required to advance our understanding of physical processes underlying the solar activity and space weather.”

Caption: A team of researchers led by Mariarita Murabito (INAF) that includes scientists from the University of Warwick and the Italian Space Agency has provided the first observational evidence that solar tornadoes are produced by swirling magnetic fields. Magnetic fields permeate the atmosphere of the Sun and are the main driver of dynamical processes on the Sun.

The horizontal velocity field in the chromosphere shows the rotational pattern of two solar tornados (indicated by yellow circles). The blue and red colours indicate line-of-sight Doppler velocities. The flow patterns reveal that plasma flows up through one tornado, connects and flows down the second tornado.