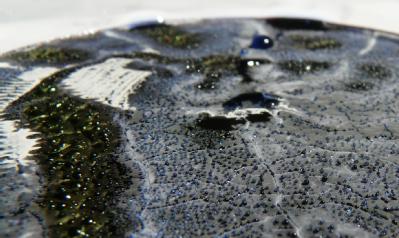 The discovery of how hormone-like molecules turn on antibiotic production in soil bacteria could unlock the untapped opportunities for medicines that are under our very feet.

An international team of scientists working at the University of Warwick, UK, and Monash University, Australia, have determined the molecular basis of a biological mechanism that could enable more efficient and cost-effective production of existing antibiotics, and also allow scientists to uncover new antibiotics in soil bacteria.

It is detailed in a new study published today (3 February) in the journal Nature.

Most clinically used antibiotics are molecules produced by micro-organisms such as bacteria. The majority of these are soil bacteria called Actinobacteria, which are cultivated in the laboratory to allow the molecules they produce to be extracted. However, the production of these molecules is frequently switched off in laboratory cultures, making them difficult to find.

The bacteria tightly control the production of their antibiotics using small molecules akin to hormones. The team at Warwick and Monash investigated a specific class of these bacterial hormones that they had previously discovered, termed 2-akyl-4-hydroxymethylfuran-3-carboxylic acids or AHFCAs, to find out what role they played in controlling the production of an antibiotic in the Actinobacterium Streptomyces coelicolor.

Using x-ray crystallography and single-particle cryo-electron microscopy techniques, they analysed the structure of a protein, known as a transcription factor, bound to a particular region of DNA from the bacterium. This prevents the bacterium from producing the antibiotic.

They then determined the structure of the transcription factor with a synthesized version of one of the AHFCA hormones bound to it, which showed how the DNA is released and antibiotic production is switched on.

“It turned out that although we were only looking at one particular class of hormones, the mechanism we found appears to be conserved across all of the different hormone classes in Actinobacteria.“

Actinobacteria are more complicated than conventional bacteria. They are generally not motile like other forms of bacteria and they have a complex development cycle that the production of the antibiotics is integrated into.

However, when grown in pure culture these bacteria will often switch off antibiotic production, confounding scientists’ efforts to study them. By understanding the molecular mechanism for how this process is controlled, scientists can switch on the production of new antibiotics that are not produced in laboratory cultures.

Dr Corre adds: “We can use these strategies to turn on production of new antibiotics in Actinobacteria. Among them, we’d hope to find some that could be useful for tackling infections caused by resistant microbes, as well as other diseases. These compounds would be hard to find via traditional processes.”

Key to the discovery was determining the structure of the complex of the transcription factor bound to the DNA, which required the use of single particle cryo-electron microscopy facilities at Monash University to overcome challenges with x-ray crystallography.

Professor Greg Challis, who co-led the study and has a joint appointment at the University of Warwick Department of Chemistry and Monash University, said: “Only a modest number of structures of this type of protein-DNA complex have been determined using x-ray crystallography over the last few decades due to the challenge of obtaining suitable crystals. By using cryo-electron microscopy we have circumvented this challenge, which should make it easier to determine the structures of similar complexes in the future. It wouldn’t have been possible to illuminate the molecular basis for control of antibiotic production by these hormones without the combined expertise of colleagues at Warwick and Monash.”

Established in 2012, the award-winning Monash Warwick Alliance brings together two research-intensive institutions, of a similar age and global reputation, to form a pioneering model for global higher education partnerships – one that is fully integrated into every layer of university life, going far beyond standard collaborative agreements in the sector.

From co-published interdisciplinary research, to joint innovations in teaching and learning, vastly increased international mobility for members of the Alliance community, and shared practice throughout professional services, the Alliance has been co-developed from its inception by colleagues on both campuses, combining the different complementary strengths of each institution.