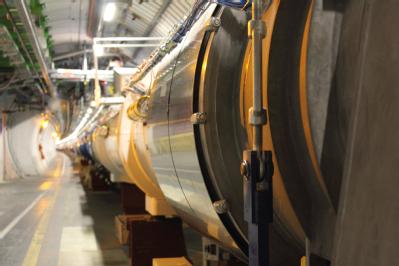 A team of physicists, including the University of Warwick, have proved that a subatomic particle can switch into its antiparticle alter-ego and back again, in a new discovery revealed today.

An extraordinarily precise measurement made by UK researchers using the LHCb experiment at CERN has provided the first evidence that charm mesons can change into their antiparticle and back again.

For more than 10 years, scientists have known that charm mesons, subatomic particles that contain a quark and an antiquark, can travel as a mixture of their particle and antiparticle states, a phenomenon called mixing. However, this new result shows for the first time that they can oscillate between the two states.

Armed with this new evidence, scientists can try to tackle some of the biggest questions in physics around how particles behave outside of the Standard Model. One being, whether these transitions are caused by unknown particles not predicted by the guiding theory.

The research, submitted today to Physical Review Letters and available on arXiv, received funding from the Science and Technology Facilities Council (STFC).

Being one and the other

As the measurement is extremely precise, the research team ensured the analysis method was even more so. To do this, the team used a novel technique originally developed by colleagues at the University of Warwick.

There are only four types of particle in the Standard Model, the theory that explains particle physics, that can turn into their antiparticle. The mixing phenomenon was first observed in Strange mesons in the 1960s and in beauty mesons in the 1980s. Until now, the only other one of the four particles that has been seen to oscillate this way is the strange-beauty meson, a measurement made in 2006.

Professor Guy Wilkinson at University of Oxford, whose group contributed to the analysis, said:

“What makes this discovery of oscillation in the charm meson particle so impressive is that, unlike the beauty mesons, the oscillation is very slow and therefore extremely difficult to measure within the time that it takes the meson to decay. This result shows the oscillations are so slow that the vast majority of particles will decay before they have a chance to oscillate. However, we are able to confirm this as a discovery because LHCb has collected so much data.”

Professor Tim Gershon at University of Warwick, developer of the analytical technique used to make the measurement, said:

“Charm meson particles are produced in proton–proton collisions and they travel on average only a few millimetres before transforming, or decaying, into other particles. By comparing the charm meson particles that decay after travelling a short distance with those that travel a little further, we have been able to measure the key quantity that controls the speed of the charm meson oscillation into anti-charm meson – the difference in mass between the heavier and lighter versions of charm meson.”

This discovery of charm meson oscillation opens up a new and exciting phase of physics exploration; researchers now want to understand the oscillation process itself, potentially a major step forward in solving the mystery of matter-antimatter asymmetry. A key area to explore is whether the rate of particle-antiparticle transitions is the same as that of antiparticle-particle transitions, and specifically whether the transitions are influenced/caused by unknown particles not predicted by the Standard Model.

Dr Mark Williams at University of Edinburgh, who convened the LHCb Charm Physics Group within which the research was performed, said:

“Tiny measurements like this can tell you big things about the Universe that you didn’t expect.”

The result, 1x10-38g, crosses the ‘five sigma’ level of statistical significance that is required to claim a discovery in particle physics.

Images available for media use:

The LHCb experiment, pictured in November 2019 (credit: University of Warwick):

LHCb is one of the four large experiments at the Large Hadron Collider (LHC) at CERN in Geneva, and is designed to study decays of particles containing a beauty quark

The primary goal of LHCb is to investigate matter-antimatter asymmetry or ‘CP violation’. After the Big Bang, matter and antimatter were created in equal amounts, but when they meet they annihilate each other. As we live in a universe dominated by matter, there must be a subtle difference between matter and antimatter that has allowed matter to survive.

This measurement was made using LHCb’s VELO subdetector. The design and construction of VELO was funded by STFC, and led by physicists at the University of Liverpool. https://lhcb-public.web.cern.ch/en/detector/VELO-en.html

CERN, the European Laboratory for Particle Physics, is one of the world’s leading laboratories for particle physics. The Organization is located on the French-Swiss border, with its headquarters in Geneva. Its Member States are: Austria, Belgium, Bulgaria, Czech Republic, Denmark, Finland, France, Germany, Greece, Hungary, Israel, Italy, Netherlands, Norway, Poland, Portugal, Romania, Serbia, Slovakia, Spain, Sweden, Switzerland and the United Kingdom. Cyprus and Slovenia are Associate Member States in the pre-stage to Membership. Croatia, India, Lithuania, Pakistan, Turkey and Ukraine are Associate Member States. The European Union, Japan, JINR, the Russian Federation, UNESCO and the United States of America currently have Observer status.

CERN is home to the largest science experiment on the planet, the Large Hadron Collider (LHC). In 2012, CERN confirmed the discovery of the Higgs Boson, the last missing piece of the standard model of particle physics, nearly 50 years after its original prediction.

The Science and Technology Facilities Council (STFC), part of UK Research and Innovation, co-ordinates and manages the UK’s involvement and subscription with CERN. The UK’s influence on both CERN Council and CERN Finance Committee is coordinated through the UK Committee on CERN (UKCC).

The UK has a major role in the Large Hadron Collider and has scientists and engineers working on all the main experiments. In the UK, engineers and scientists at 20 research sites and universities are involved in designing and building equipment and analysing data. UK researchers are involved with all four of the main detectors and the computer GRID. British staff based at CERN has leading roles in managing and running the collider and detectors.

UK membership of CERN gives our physicists and engineers access to the experiments and allows UK industry to bid for contracts, UK nationals to compete for jobs and research positions at CERN, and UK schools and teachers to visit. UK scientists hold many key roles at CERN. Firms in the UK win contracts for work at CERN worth millions of pounds each year. The impact of winning contracts is often even greater as it enables companies to win business elsewhere.

The University of Oxford
Oxford University has been placed number 1 in the Times Higher Education World University Rankings for the fifth year running, and at the heart of this success is our ground-breaking research and innovation. Oxford is world-famous for research excellence and home to some of the most talented people from across the globe. Our work helps the lives of millions, solving real-world problems through a huge network of partnerships and collaborations. The breadth and interdisciplinary nature of our research sparks imaginative and inventive insights and solutions.