● The planet was found in the Neptunian Desert, where such objects are rarely found

● Could be a transitional planet, a deflated gas giant 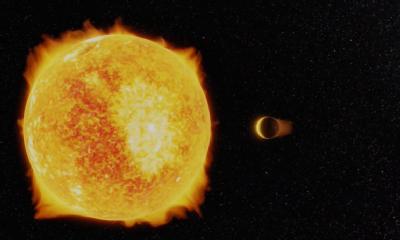 An international team of astronomers, including a group from the University of Warwick, have discovered the first Ultra Hot Neptune planet orbiting the nearby star LTT 9779.

The world orbits so close to its star that its year lasts only 19 hours, meaning the stellar radiation heats the planet to over 1700 degrees Celsius.

At these temperatures, heavy elements like iron can be ionized in the atmosphere and molecules disassociated, providing a unique laboratory to study the chemistry of planets outside the solar system.

Although the world weighs twice as much as Neptune does, it is also slightly larger and so has a similar density. Therefore, LTT 9779b should have a huge core of around 28 Earth-masses, and an atmosphere that makes up around 9% of the total planetary mass.

The system itself is around half the age of the Sun, at 2 billion years old, and given the intense irradiation, a Neptune-like planet would not be expected to keep its atmosphere for so long, providing an intriguing puzzle to solve; how such an improbable system came to be.

LTT 9779 is a Sun-like star located at a distance of 260 light-years, a stone’s throw in astronomical terms. It is super metal-rich, having twice the amount of iron in its atmosphere than the Sun. This could be a key indicator that the planet was originally a much larger gas giant, since these bodies preferentially form close to stars with the highest iron abundances.

Initial indications of the existence of the planet were made using the Transiting Exoplanet Survey Satellite (TESS), as part of its mission to discover small transiting planets orbiting nearby and bright stars across the whole sky. Such transits are found when a planet passes directly in front of its parent star, blocking some of the starlight, and the amount of light blocked reveals the companion’s size. Worlds like these, once fully confirmed, can allow astronomers to investigate their atmospheres, providing a deeper understanding of planet formation and evolution processes.

The transit signal was quickly confirmed in early November 2018 as originating from a planetary mass body, using observations taken with the High Accuracy Radial-velocity Planet Searcher (HARPS) instrument, mounted on the 3.6m telescope at the ESO la Silla Observatory in northern Chile. HARPS uses the Doppler Wobble method to measure planet masses and orbital characteristics like period. When objects are found to transit, Doppler measurements can be organized to confirm the planetary nature in an efficient manner. In the case of LTT 9779b, the team were able to confirm the reality of the planet after only one week of observations.

He said: “We were very pleased when our NGTS telescopes confirmed the transit signal from this exciting new planet. The dip in brightness is only two tenths of one percent, and very few telescopes are capable of making such precise measurements.”

Professor James Jenkins from the Department of Astronomy at the Universidad de Chile who led the team said: “The discovery of LTT 9779b so early in the TESS mission was a complete surprise; a gamble that paid off. The majority of transit events with periods less than one day turnout to be false-positives, normally background eclipsing binary stars.”

LTT 9779b is a rare beast indeed, existing in a sparsely populated region of the planetary parameter space. “The planet exists in something known as the ‘Neptune Desert’, a region devoid of planets when we look at the population of planetary masses and sizes. Although icy giants seem to be a fairly common by-product of the planet formation process, this is not the case very close to their stars. We believe these planets get stripped of their atmospheres over cosmic time, ending up as so-called Ultra Short Period planets.” Jenkins explained.

Calculations by Dr King confirmed that the atmosphere of LTT 9779b should have been stripped of its atmosphere through a process called photoevaporation. He said: “Intense X-ray and ultraviolet from the young parent star will have heated the upper atmosphere of the planet and should have driven the atmospheric gases into space.” On the other hand, Dr King’s calculations showed there was not enough X-ray heating for LTT 9779b to have started out as a much more massive gas giant. “Photoevaporation should have resulted in either a bare rock or a gas giant,” he explained. “Which means there has to be something new and unusual we have to try to explain about this planet’s history.”

Professor Jenkins remarked: “Planetary structure models tell us that the planet is a giant core dominated world, but crucially, there should exist two to three Earth-masses of atmospheric gas. But if the star is so old, why does any atmosphere exist at all? Well, if LTT 9779b started life as a gas giant, then a process called Roche Lobe Overflow could have transferred significant amounts of the atmospheric gas onto the star.”

Roche Lobe Overflow is a process whereby a planet comes so close to its star that the star’s stronger gravity can capture the outer layers of the planet, causing it to transfer onto the star and so significantly decreasing the mass of the planet. Models predict outcomes similar to that of the LTT 9779 system, but they also require some fine tuning.

“It could also be that LTT 9779b arrived at its current orbit quite late in the day, and so hasn’t had time to be stripped of the atmosphere. Collisions with other planets in the system could have thrown it inwards towards the star. Indeed, since it is such a unique and rare world, more exotic scenarios may be plausible.” Jenkins added.

Since the planet does seem to have a significant atmosphere, and that it orbits a relatively bright star, future studies of the planetary atmosphere may unlock some of the mysteries related to how such planets form, how they evolve, and the details of what they are made of. Jenkins concluded: “The planet is very hot, which motivates a search for elements heavier than Hydrogen and Helium, along with ionised atomic nuclei. It’s sobering to think that this ‘improbable planet’ is likely so rare that we won’t find another laboratory quite like it to study the nature of Ultra Hot Neptunes in detail. Therefore, we must extract every ounce of knowledge that we can from this diamond in the rough, observing it with both space-based and ground-based instruments over the coming years.”

Download an animation of the planet (credit: Ricardo Ramirez): https://warwick.ac.uk/services/communications/medialibrary/images/september_2020/combined_1.mp4