The clearest and most detailed images of the Sun have been captured by the largest telescope in the world. Just-released first images and videos from the National Science Foundation’s (NSF) Daniel K. Inouye Solar Telescope, which involves University of Warwick scientists, reveal unprecedented detail of the Sun’s surface, with experts saying it will enable a new era of solar science and a leap forward in understanding the Sun and its impacts on our planet.

The new images from NSF’s Inouye Solar Telescope 4-meter solar telescope, which sits near the summit of Haleakalā in Hawaiʻi, show a close-up view of the Sun’s surface including a pattern of turbulent “boiling” plasma that covers the entire Sun. The images also show cell-like structures - each about the size of Texas - which are the signature of violent motions that transport heat from inside the Sun to its surface.

They were taken with cameras developed and supplied to the project by a UK consortium including the University of Warwick and which is led by Queen’s University Belfast. It involves seven other UK institutes and industry including Andor Technology, Armagh Observatory, University of Glasgow, UCL Mullard Space Science Laboratory, Northumbria University, University of Sheffield and St. Andrews University. Funding has been provided by UK Research and Innovation’s Science and Technology Facilities Council.

Dr Erwin Verwichte from the University of Warwick said: “The Inouye Solar Telescope provides a view of the Sun’s atmosphere that is ground-breaking. The dynamics of the solar surface are revealed at an unparalleled level of quality and detail. The telescope will provide the ladder for a step change in our understanding of how the Sun’s activity manifests itself through flares and eruptions as well as the flow of energy and matter into the Sun’s corona.”

Experts say the telescope will play a critical role in better understanding the Sun and space weather, and provide important details for scientists.

NSF Director, France Córdova, said, “NSF’s Inouye Solar Telescope will be able to map the magnetic fields within the Sun’s corona, where solar eruptions occur that can impact life on Earth. This telescope will improve our understanding of what drives space weather and ultimately help forecasters better predict solar storms.” 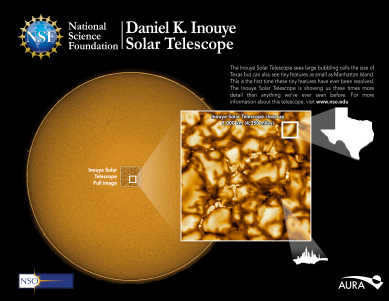 Activity on the Sun, known as space weather, can affect systems on Earth. Magnetic eruptions on the Sun can impact air travel, disrupt satellite communications and bring down power grids, causing long-lasting blackouts and disabling technologies such as GPS.

Finally resolving these tiny magnetic features is central to what makes the Inouye Solar Telescope unique. It can measure and characterise the Sun’s magnetic field in more detail than ever seen before and determine the causes of potentially harmful solar activity.

“It’s all about the magnetic field,” said Thomas Rimmele, director of the Inouye Solar Telescope. “To unravel the Sun’s biggest mysteries, we have to not only be able to clearly see these tiny structures from 93 million miles away but very precisely measure their magnetic field strength and direction near the surface and trace the field as it extends out into the million-degree corona, the outer atmosphere of the Sun.”

Better understanding the origins of potential disasters will enable governments and utilities to better prepare for inevitable future space weather events. It is expected that notification of potential impacts could occur earlier - as much as 48 hours ahead of time instead of the current standard, which is about 48 minutes. This would allow for more time to secure power grids and critical infrastructure and to put satellites into safe mode.

NSF’s new ground-based Inouye Solar Telescope will work with space-based solar observation tools such as NASA’s Parker Solar Probe (currently in orbit around the Sun) and the European Space Agency/NASA Solar Orbiter (soon to be launched). The three solar observation initiatives will expand the frontiers of solar research and improve scientists’ ability to predict space weather.

“These first images are just the beginning,” said David Boboltz, programme director in NSF’s division of astronomical sciences and who oversees the facility’s construction and operations. “Over the next six months, the Inouye telescope’s team of scientists, engineers and technicians will continue testing and commissioning the telescope to make it ready for use by the international solar scientific community. The Inouye Solar Telescope will collect more information about our Sun during the first five years of its lifetime than all the solar data gathered since Galileo first pointed a telescope at the Sun in 1612.”

Dr Erwin Verwichte from the University of Warwick is available for interview. For interviews contact: