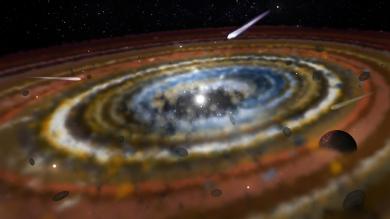 Three extrasolar comets have been discovered around the star Beta Pictoris, 63 light years away, by an international team including a University of Warwick researcher.

Analysis of data from the current NASA mission TESS has revealed the objects for the first time thanks to Sebastian Zieba and Konstanze Zwintz from the Institute of Astro- and Particle Physics at the University of Innsbruck, together with colleagues from Leiden University (Netherlands) and the University of Warwick (UK).

Just about a year after the launch of NASA mission TESS, the first three comets orbiting the nearby star Beta Pictoris outside our solar system were discovered in data from the space telescope.

The main goal of TESS is to search for exoplanets - planets orbiting other stars. The recognition of signals from much smaller exocomets compared to planets requires the analysis of a precise light curve, which can now be obtained using the technical sophistication of the new space telescope.

Sebastian Zieba, Master’s student in the team of Konstanze Zwintz at the Institute of Astro- and Particle Physics at the University of Innsbruck, discovered the signal of the exocomets when he investigated the TESS light curve of Beta Pictoris in March this year. "The data showed a significant decrease in the intensity of the light of the observed star. These variations due to darkening by an object in the star's orbit can clearly be related to a comet," Sebastian Zieba and Konstanze Zwintz explain the sensational discovery. 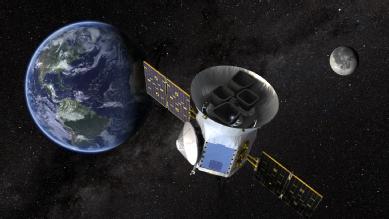 In collaboration with Matthew Kenworthy from the Leiden University (Netherlands) and Grant Kennedy from the University of Warwick (UK), they analysed and interpreted the signals of the exocomets. The results will now be published in the international journal "Astronomy and Astrophysics". Three similar exocomet systems have recently been found around three other stars during data analysis by NASA's Kepler mission. The researchers suggest that exocomets are more likely to be found around young stars. "The space telescope Kepler concentrated on older stars similar to the Sun in a relatively small area in the sky. TESS, on the other hand, observes stars all over the sky, including young stars. We therefore expect further discoveries of this kind in the future," says Konstanze Zwintz. Zwintz’s research focuses on young stars and is regarded as an internationally renowned expert in the field of asteroseismology.

Dr Grant Kennedy, from the University of Warwick Department of Physics, assisted with the modelling and interpretation of the data. He said: "This discovery is really important for the science of extrasolar comets for several reasons. Beta Pictoris had been thought to host exocomets for three decades from a different technique, and the TESS data provide long overdue and independent evidence for their existence. Our next aim is to find similar signatures around other stars, and this discovery shows that TESS is up to the task.”

The young and very bright star Beta Pictoris is a "celebrity" among astronomers for many reasons: "Already in the 1980s, investigations of Beta Pictoris provided convincing evidence for planetary systems around stars other than our Sun - a decade before exoplanets were even discovered for the first time. In addition, there was already indirect evidence for comets at that time based on the characteristic signature of evaporating gas coming off them," adds Konstanze Zwintz. At about 23 million years old, Beta Pictoris is a relatively young star, "a young adult star compared to human age," says the astronomer.

The discovery of exocomets around Beta Pictoris was predicted in 1999 in a paper by the astrophysicists Alain Lecavelier des Etangs, Alfred Vidal-Madjar and Roger Ferlet. "Together with our colleagues from Leiden and Warwick, we are pleased to have finally confirmed this theory," say Zieba and Zwintz. The scientists expect to discover many more comets and asteroids in this area, as it is a young star. "In the future, we want to find answers to the question of how often exocomets occur and whether their number really decreases with the age of a star. Information about this is important because by analysing the comets around a young star we can also draw conclusions about the history of our own solar system. Because we know that our solar system showed considerably more comets in 'young years'", explains Konstanze Zwintz.

In the future, the researchers want to investigate the composition of exocomets, for example regarding their water content. The comets themselves are smaller than exoplanets, but have very large tails, which can be up to many millions of kilometres long. "What we are seeing is not the comet nucleus itself, but the material blown off the comet and trailing behind it. So the TESS data do not tell us how big the comets were, since the extent of the dust tail could be very big and not very dense, or less big and more dense. Both situations would give the same light curve," explains Zwintz.

Artist’s impression of the exocomets in the planetary system around b Pictoris (Credits: Michaela Pink): https://www.uibk.ac.at/public-relations/presse/archiv/2019/1149/bilder/pic_8a0bb1a6bd20190521134414.jpg