A new writing competition with prizes of £250, is inspiring Coventry schoolchildren to see the world from the perspective of other people.

The Two Chairs Creative Writing Competition, which is open to all, has seen its competition’s creator, Dr James Hodkinson of the University of Warwick, has been holding workshops in schools to discuss the themes and ideas behind the competition. 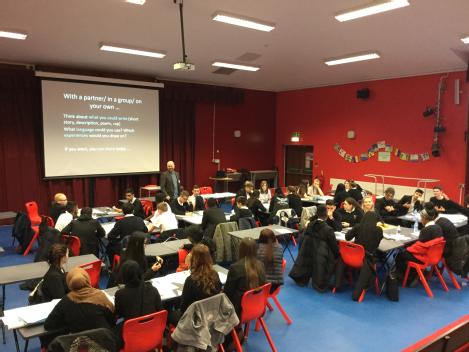 In a recent session at Lyng Hall School, Coventry, GCSE pupils learnt about Hafez-Goethe Monument of two empty chairs that inspired the competition. Following the workshops one pupil said that monument showed “that all of us are equal and come from the same place”, whilst another that it showed “two different cultures coming together. It shows unity”.

“It was fantastic to work with students from such diverse backgrounds and faiths. The school puts a lot of emphasis on intercultural literacy, so the two chairs competition and its themes were pitched just right for them. It was great to see the different responses to those themes – some participants were thinking of poems, others thinking of rap lyrics. This isn’t just a highbrow affair.

“We’re interested in responses of all kinds. Next week we’re off to do the same in a different setting: King Henry VIII School in Coventry, and the week after that, Westminster School in London. I’m trying to reach as many different audiences as possible and gauge their responses.” 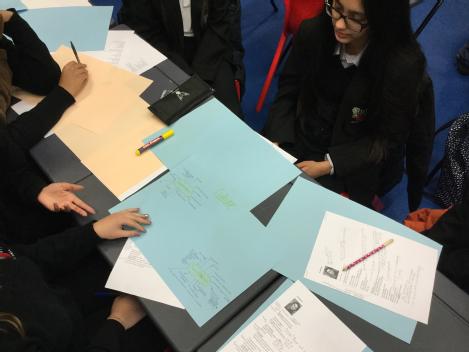 The Two Chairs Creative Writing Competition invites entrants to write and submit pieces in English or German, whether they be poems, short stories or prose that express what the chairs say to them, with the prizes of £250 will be awarded to the winners of the Under 18 and Over 18 categories in both English in German.

Entries are open until March 2nd and will be judged by a leading team of poets and writers, including British-Somali poet Momtaza Mehri, performance poet, writer and BBC Radio 3 presenter, Ian MacMillan, and British-Muslim writer Hanan Issa.

“The Two Chairs Creative Writing Competition writing competition is open to everyone. It asks you to consider the two stone chairs of the 'Hafez-Goethe Monument' in Weimar, Germany. The chairs were left empty by the sculptors and allow anyone to occupy them, or even to ‘swap’ chairs and see the world from the ‘other’ perspective.

“I wanted to get people to write around this key idea - that we can be connected to people of other cultures, mixing and intertwining with them. I want writers to use this idea in their compositions, using personal or imagined experiences of encountering or crossing different cultures to produce the piece.”

The Hafez-Goethe Monument commemorates the work of the German poet Johann Wolfgang Goethe, whose collection of poems the West-Eastern Divan not only imagined a dialogue between the Christian European and Islamic worlds, but also sought to break down of rigid cultural divisions between them.