University of Warwick researchers are a key part of a team of scientists who have just detected an object that is a record 13 billion light years away making it the most distant known object in the Universe.

On the 23rd April 2009 a flash of high energy radiation was detected by a US/UK/Italian satellite called Swift.  Called a gamma-ray burst (GRB), Swift typically detects several such events per month.

Scientists have long known that GRBs are exceptionally violent explosions occurring in distant galaxies far across the universe, and are briefly far brighter than the whole galaxy of stars in which they reside.

The new burst turned out to be very special, though, breaking the record for the most distant object with a definite measured distance.

Team member Dr Andrew Levan of the University of Warwick said "The most exciting part of the discovery is that because the light set off 13 billion years ago, it means we are seeing now an event which actually happened only about 650 million years after the Big Bang. This is one of the few ways we can learn something about what the universe was like back at the time when the first stars and galaxies were forming".

Professor Nial Tanvir, of the University of Leicester, leader of the team which made the discovery said "We've been preparing for an event like this for several years: it required different telescopes around the world, all working together in order to make this discovery".

The route to establishing the distance was a tortuous one.  Within minutes of the burst, the United Kingdom Infra Red Telescope (UKIRT) in Hawaii, made the first deep photograph of the field discovering a faint source of light, the so-called "afterglow" of the explosion.

This was followed an hour or so later with even deeper observations with the Gemini-North telescope, also in Hawaii, which showed the afterglow to have colours characteristic of a very distant object.

The key to estimating the vast distances through the cosmos relies on the measuring the "redshift" of the light from the source.

Due to the expansion of the universe, the light we see from distant objects is of lower energy, and hence redder.  For very remote sources the optical light moves completely into the infrared part of the spectrum, and hence requires special detectors to see it.

In the case of the April 23rd burst, the light appeared to be redshifted further than that seen for any previous object, but definitive proof required observations with a spectrograph which would give a more precise estimate of the redshift.

About 18 hours after the burst, a spectrum was obtained using the European Southern Observatory's "Very Large Telescope" (VLT), which confirmed the redshift to be about 8, which puts the burst at a distance of about 13 billion light years. This compares to the previous record held by Japanese astronomers who had found a galaxy at a redshift of 6.9 in 2006. 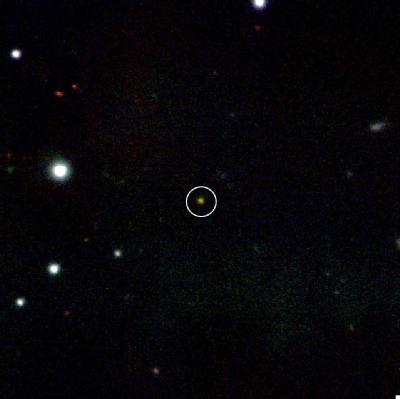 Dr Andrew Levan can be reached via: