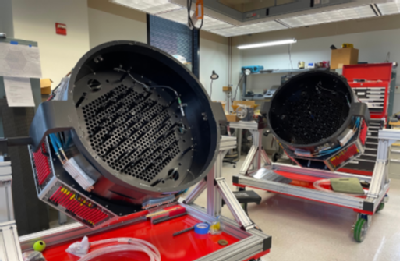 An observatory spearheading a groundbreaking astronomical survey has completed a key upgrade, which will allow University of Warwick astronomers to achieve the aim of surveying hundreds of thousands of our near-neighbour stars.

“We are thrilled to have reached this technological milestone despite being in the midst of a global pandemic and are excited to witness how this shift will enhance the work of the project,” said Professor Juna Kollmeier, director of this fifth phase of the SDSS and the director of the Canadian Institute for Theoretical Astrophysics (CITA) at the Faculty of Arts & Science at the University of Toronto. “This project has been truly collaborative, involving the contributions of scientists at more than 50 institutions from around the world.”

Previously, optical fibers were plugged into plates by hand. That system has been replaced by hundreds of high-precision robots that can put fibers anywhere in the focal plane. The system now installed at APO is the first of two units; its twin is currently under construction and will soon head to Las Campanas Observatory in Chile to survey the southern sky.

“This new system is a huge accomplishment for the fifth phase of SDSS,” said Gail Zasowski, a professor at the University of Utah and the SDSS-V project spokesperson. “It’s been an exciting road to this point, sometimes fraught with challenges, but it’s wonderful to have arrived here at last!”

The SDSS international consortium includes the University of Warwick, which is leading an observational survey of all stars within 325 light years of the Earth - encompassing 350,000 systems, many of which are likely to host planetary systems.

Project lead Professor Boris Gaensicke of the University of Warwick Department of Physics said: “I am absolutely thrilled by the developments within SDSS-V. Throughout the past 20 years, the previous generations of the SDSS have fuelled our research with a steady flow of very exciting observations, but the survey had two major limitations. Each field that it observed had to be configured by hand, which took fair amount of time. With the new robotic fibre positioners, we will be able to move to a new field within minutes, so it will be much easier to cover large areas of the sky. And so far, SDSS was only observing the Northern hemisphere. With the additional telescope at Las Campanas, Chile, we will enter unchartered territory, where a plethora of discoveries await us.”

The development of the new robotic FPS is a global effort built by an international team, including Ohio State University’s Imaging Sciences Laboratory, the University of Washington, École Polytechnique Fédérale de Lausanne (EPFL) and the Carnegie Observatories in Pasadena. These design teams overcame numerous challenges posed by the global pandemic by developing and constructing components wherever they were – some in their own garages and backyards – and shipping them elsewhere for further assembly. The robots were built in Switzerland and integrated into the main mechanical units in Columbus, Ohio. From there, they traveled to their final home in New Mexico — and soon, they will head to Chile as well.

One of the core science programs enabled by the FPS is the Milky Way Mapper (MWM) which will study our home galaxy in unprecedented detail. The ecosystem of stars, gas, dust and dark matter in large galaxies like our own has been shaped over billions of years by numerous physical processes that dominate on different scales in space and time. It will take advantage of our unique perspective within the Milky Way Galaxy to create a uniquely high-resolution map of the galaxy’s stars and how they are moving.

The MWM will also measure masses, ages, chemical compositions, the presence of companions, and a slew of other properties for vast samples of stars of all types — including hot massive stars, stars that are just forming, and the white dwarfs that are dead remnants of stars like our Sun. It will also target tens of thousands of multi-star and planetary systems in order to understand how often multi-companion systems form and what determines how they are structured.

“Without the observing speed and flexibility that the FPS gives us, it would be simply impossible to target so many objects across the entire sky,” said Jennifer Johnson, a professor at Ohio State and head of the MWM team.

“Using the FPS, we will carry out the first dedicated survey of white dwarfs across the entire sky. White dwarfs are the burnt-out left-overs of stars like the Sun, and studying these dead stars gives us insight into a vast range of important questions, ranging from the composition of exo-planets to the nature of supernova explosions. SDSS-V will allow us to make major progress in all these areas.” Adds Professor Boris Gaensicke.

From design to reality: At the start of the pandemic, the FPS team had their designs all ready and were poised to begin the process of assembly, integration, and testing in the labs. The COVID-19 pandemic slowed, but did not stop the team.

LEFT: interaction zone modeling for a subset of robots in the focal plane of the telescope

RIGHT: The APO FPS with its fibers uncovered and backlit

The twin FPS units (prior to robot installation). One of these goes to the Southern Hemisphere and the other goes to the Northern hemisphere.

ABOUT THE SLOAN DIGITAL SKY SURVEY

Funding for the Sloan Digital Sky Survey V has been provided by the Alfred P. Sloan Foundation, the Heising-Simons Foundation, and the Participating Institutions. SDSS acknowledges support and resources from the Center for High-Performance Computing at the University of Utah. The SDSS web site is www.sdss5.org.