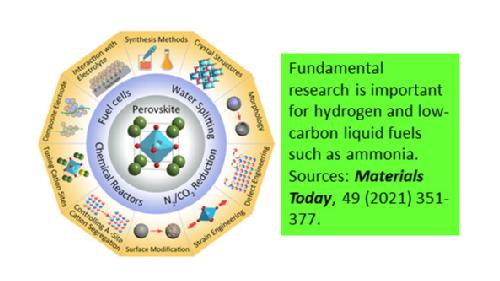 A new project investigating how the UK could increase its use of hydrogen and alternative liquid fuels in an effort to develop the low-carbon economy will include expertise from the University of Warwick.

Hydrogen and hydrogen-based, low-carbon liquid fuels, such as ammonia, are essential for the UK to reach net zero greenhouse gases by 2050. Hydrogen production will be doubled to accommodate the UK’s newly announced energy strategy.

Engineering and Physical Sciences Research Council (EPSRC) funding, initially totalling over £400k, will be used to support research activities that include UK-wide stakeholder engagement workshops. The research team, a collaboration between the Universities of Warwick and Sheffield, led by the University of Bath, will bring together high-impact, multidisciplinary, multi-site projects, with the aim of building longer-term research alliances and a National Centre of Excellence.

The team will focus in particular on the fundamental research, tackling the challenges on using hydrogen and low-carbon liquid fuels such as ammonia as the key energy vectors to help decarbonise transport, electricity generation and domestic and industrial heating, to develop low-carbon economy. The University of Warwick team brings expertise in hydrogen production (electrolysers), hydrogen end use (fuel cells) and ammonia related technologies (ammonia synthesis and cracking catalysts, ammonia electrolysers and fuel cells).

Professor Shanwen Tao of the University of Warwick School of Engineering said: “Hydrogen and low-carbon liquid fuels, such as ammonia, are important energy vectors for the low-carbon economy. We are privileged to be selected as one of the hydrogen researcher coordinators. I wish to take this opportunity to collaborate with other academic and industrial partners together with researchers in the UK to boost fundamental research related to hydrogen and low-carbon liquid fuels, pushing forward a low-carbon economy.”

Professor Tim Mays at University of Bath said: “A thriving, low carbon hydrogen sector is essential for the government’s plans to build back better, with a cleaner, greener energy system. Large amounts of low carbon hydrogen and alternative liquid fuels such as ammonia will be needed, which must be stored and transported to points of use. Much research is required, and we will work collaboratively across multiple disciplines to help meet these challenges.”

“There is a growing consensus that these fuels will play a key role in the deep decarbonisation of all sectors of the UK economy, as exemplified by the publication of the government’s 2021 UK hydrogen strategy.

“Over the next six months, the hydrogen research coordinators will work across the UK to build an understanding, and galvanise expertise, in research and systems integration.

“The focussed, multi-stakeholder plan they create will support the consideration of hydrogen as a key component of the UK’s energy mix and inform EPSRC’s future plans for an integrated, ambitious research and innovation programme working across the hydrogen value chain and its major use sectors in partnership with business.”