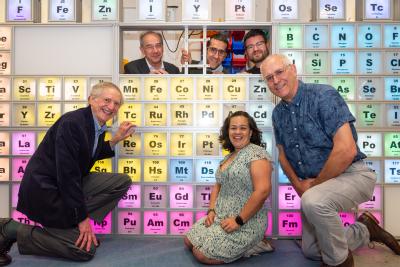 Chemists at the University of Warwick have scored a hat-trick for their subject as the Royal Society of Chemistry announce the winners of their prestigious prizes.

Research at the University of Warwick has been recognised with two Horizon Prizes, which celebrate the most exciting, contemporary chemical science at the cutting edge of research and innovation, while a Warwick chemist is the recipient of a Research and Innovation Prize, which celebrate brilliant individuals across industry and academia.

This year’s winners from the University of Warwick are:

· Professor Vasilios Stavros has been named winner of the Royal Society of Chemistry’s Bourke-Liversidge Award in recognition of brilliance in research and innovation. 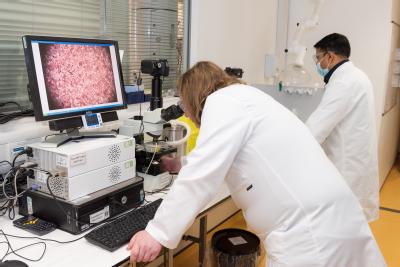 A UK-led team of chemical scientists, ‘Team Ice’, has been named the winner of the Royal Society of Chemistry’s Chemistry Biology Interface Division Horizon Prize. Led by scientists at the University of Warwick including Professor Matthew Gibson, Dr Gabriele Sosso and Dr Tom Whale, Team Ice won the prize for the development, application and translation of chemical tools for cryobiology. These advances have a direct impact on the development and delivery of emerging medicines.

The team, a multidisciplinary collaboration between academics, industrial partners and Kew Gardens, worked to explore cryobiology, studying the effects of extremely low temperature on living organisms and cells.

After receiving the prize, Professor Matthew Gibson, from the Department of Chemistry and Warwick Medical School, said: “Understanding the impact of ice and low temperature on biology, and the world around us, is a crucial research question. The research has impact from climate change, to developing the next generation of cryoprotectants which are essential for drug discovery and emerging regenerative medicines. Our wider team of academics and industrialists is undertaking both fundamental and applied multidisciplinary research, combining experiment with theory and modelling.

Team Ice’s work will find its most critical impacts in future clinical applications. The work will reduce the toxicity of current cell-based therapies and will allow increased flexibility in patient treatment, improving patient outcomes entirely.

An international team of scientists led by the University of Warwick has been named the winner of the Royal Society of Chemistry’s Dalton Division Horizon Prize. The In-cell Organometallic Redox Catalysis Team won the prize for pioneering work on catalysis of redox reactions in cancer cells by synthetic organometallic complexes. The catalysis disturbs the redox balance inside the cell and enhances anticancer activity.

The multidisciplinary team is led by Professors Peter Sadler and Martin Wills at the University of Warwick, and supported by scientists at Chimie ParisTech (PSL University), University of Zürich, Sun Yat-sen University, Heriot Watt University and the Technische Universität Kaiserslautern.

After receiving the prize, Peter Sadler, Professor of Chemistry at the University of Warwick said: “The project demonstrates how research on fundamental questions can lead to applications and goals in cancer treatment. We’re incredibly proud of the results achieved by a team that is collectively motivated to drive chemical research beyond the boundaries of current knowledge by using cutting-edge methods and techniques with the potential to improve lives.”

Natural enzymes, large molecules containing thousands of atoms, catalyse many reactions in our bodies’ cells. The team’s work questioned whether small metal-containing molecules of only tens of atoms synthesised chemically in the lab could also catalyse similar reactions. If successful, potential applications include drugs that could modulate biochemical pathways.

The team synthesised catalysts containing the precious metals ruthenium, osmium and iridium, showing that they can efficiently catalyse reactions of biological importance. This new approach heralds the introduction of new types of medication – novel metallodrugs with minimal side effects for use at very low doses, helping to cure diseases such as cancer that are resistant to current treatments.

Professor Vasilios Stavros has been named winner of the Royal Society of Chemistry’s Bourke-Liversidge Award. Based at University of Warwick, Professor Stavros won the prize for contributions to gas, solution, and condensed-phase spectroscopy spanning both fundamental and applied aspects.

After receiving the prize, Professor Stavros said: “I feel a mixed emotion of surprise and delight! I am also incredibly thankful to the amazing co-workers (PhDs, PDRAs, UG project students, collaborators, etc.) I have had the pleasure to work with. This is as much their achievement as it is mine.”

Professor Stavros “zaps molecules” found in nature with laser light and studies how these molecules deal with the potentially harmful ultraviolet radiation they have been exposed to. The insight we gain from these studies is far-reaching: from helping us understand why nature has chosen certain molecular building blocks (DNA bases, for example) to designing next generation ultraviolet radiation filters for use in sunscreens.

“Great science changes the way we think about things – either through the techniques used, the findings themselves, the products that emerge or even in how we interact with the world and those around us. Importantly, it also allows us to reflect on the incredible people involved in this work and how they have achieved their results. The work of Professor Stavros is a fantastic example of why we celebrate great science, and we’re very proud to recognise their contribution today.”

“Some of the most incredible work in chemical science is carried out by teams and collaborations who use their diversity of thought, experience and skills to deliver astonishing results. These synergies are often at the very forefront of expanding our understanding of the world around us, and why our judges have such a difficult job selecting winners for our Horizon Prizes.

“Although we are in the midst of negotiating a particularly turbulent and challenging era, it is important to celebrate successes and advances in understanding as genuine opportunities to improve our lives. The work of the In-cell Organometallic Redox Catalysis Team and Team Ice is a fantastic example of why we celebrate great science; and we’re very proud to recognise their contribution today.”

The Royal Society of Chemistry’s prizes have recognised excellence in the chemical sciences for more than 150 years. In 2019, the organisation announced the biggest overhaul of this portfolio in its history, designed to better reflect modern scientific work and culture. The winners join a prestigious list of past-winners in the RSC’s prize portfolio, of which 50 individuals have gone on to win Nobel Prizes for their work, including including 2016 Nobel laureates Jean-Pierre Sauvage, Fraser Stoddart and Ben Feringa.

The Royal Society of Chemistry’s Prizes portfolio is one of the oldest and most prestigious in the world, recognising achievements by individuals, teams and organisations in advancing the chemical sciences. We reward those undertaking excellent work in the chemical sciences from across the world.

More information is available at: rsc.li/prizes.

About the Royal Society of Chemistry

We are an international organisation connecting chemical scientists with each other, with other scientists, and with society as a whole. Founded in 1841 and based in London, UK, we have an international membership of over 50,000. We use the surplus from our global publishing and knowledge business to give thousands of chemical scientists the support and resources required to make vital advances in chemical knowledge. We develop, recognise and celebrate professional capabilities, and we bring people together to spark new ideas and new partnerships. We support teachers to inspire future generations of scientists, and we speak up to influence the people making decisions that affect us all. We are a catalyst for the chemistry that enriches our world.