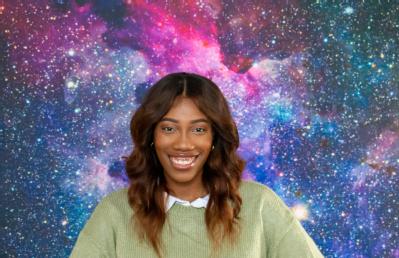 Vanessa Emeka-Okafor, who will be joining the University of Warwick as a PhD student, has been awarded one of this year’s prestigious grants from the Bell Burnell Graduate Scholarship Fund.

Vanessa will be studying for a PhD in the University of Warwick’s Department of Physics. Her project will focus on obtaining and analysing observations of exoplanet systems at infrared wavelengths, by using the biggest telescopes on the Earth (VLT, TNG, CAHA) and high resolution spectrographs. These observations will target giant and Neptune-size exoplanets and the analysis will aim at measuring their physical (temperature) and chemical (composition) properties.

In addition, the project will focus on simulated observations of temperate exoplanets via the next-gen Extremely Large Telescope. It will focus on a few classes of atmospheres that are thought to be dominant, and on the detection of biomarkers, i.e. a set of molecules that is commonly interpreted as indicator of biological activity.

The innovative fund was set up by Professor Dame Jocelyn Bell Burnell and the Institute of Physics (IOP), the UK and Ireland’s professional body for physicists.

Vanessa said: "Dame Jocelyn Bell Burnell has always been one of my biggest inspirations. I’m super excited to have won this scholarship and to be starting my PhD at Warwick. It wouldn’t be possible without her goodwill and generosity; I'm extremely grateful.”

Dame Jocelyn, a former president of the IOP, was awarded the 2019 Special Breakthrough Prize in Fundamental Physics for her role in the discovery of pulsars, and for her continued scientific leadership and engagement with the scientific and wider communities. She was awarded an honorary Doctor of Science degree by the University of Warwick in 1995.

The Breakthrough Prize included award included £2.3m which she immediately donated to the IOP to help counter what she described as ‘the unconscious bias that still exists in physics research’ saying:

"I don't need the money myself and it seemed to me that this was perhaps the best use I could put it to."

The Bell Burnell Graduate Scholarship Fund that resulted is an innovative doctoral scholarships fund that aims to encourage diversity in physics by assisting students from groups under-represented in the physics research community to undertake physics PhD programmes.

Students encouraged to apply include women, people with refugee status, and ethnic minority, disabled, financially disadvantaged and other students who would otherwise struggle to complete a course of postgraduate study due to their circumstances.

As part of the selection process, applicants are asked how they would act as be ambassadors for the Fund, to help introduce other students to it.

Professor Helen Gleeson, Cavendish Professor of Physics at the University of Leeds, is the Chair of Judges. She said:

“It’s a privilege to play a part in identifying and working with the recipients of the Bell Burnell Graduate Scholarship Fund.

“The competition was very tough, with a large number of excellent students applying. I was hugely impressed by the candidates, but saddened that without funds such as this they probably cannot take that next step in their careers.

“This year we were able to double the number of awards made due to fundraising by the Institute of Physics that builds on Dame Jocelyn’s donation. That meant that eight thoroughly deserving students can embark on a PhD who would not have otherwise been able to do so.

“The difference that this fund is making is perhaps encapsulated in what one student said to me on learning of their award of a Bell Burnell Graduate Scholarship: ‘I can’t emphasise how much this means to me. …I am looking forward to mentoring future students in the same nurturing manner that (he and) other academics have done for me… Thank you for changing my life.’

“The successful applicants are all embarking on exciting research projects, and we are looking forward to them inspiring others in their ambassadorial role.”

“To be able to hear what it means to the lives and futures of those who have and are now receiving scholarships is heartening for all of us who are committed to improving diversity in physics.

“We know that diversity means better research, and together with our continued commitment to support the physics community in being an inclusive environment within which everyone can thrive, we will see significant changes. Dame Jocelyn’s generosity has made this possible and we remain incredibly proud that we are able to run this scheme and be part of seeing greater diversity of those able to go on to study for their PhDs.”

The Institute of Physics (IOP)

The Institute of Physics (IOP) is the professional body and learned society for physics in the UK and Ireland. It seeks to raise public awareness and understanding of physics, inspire people to develop their knowledge, understanding and enjoyment of physics and support the development of a diverse and inclusive physics community. As a charity, it has a mission to ensure that physics delivers on its exceptional potential to benefit society.

The Bell Burnell Graduate Scholarship Fund is made possible thanks to Professor Dame Jocelyn Bell Burnell’s donation of £2.3m. The fund is administered and managed by the IOP and supported by a panel that reviews qualifying applicants and selects those to be funded. This year, the IOP doubled the number of beneficiaries from four to eight as a result of a legacy gift. The IOP is actively seeking further funds to increase the number of PhD students supported and/or grants made in the future.

The Bell Burnell Graduate Scholarship Fund (BBGSF) supports students wishing to study a PhD in Physics and has a specific mission to help students from groups currently under-represented in physics, including female students, black and other minority ethnic (BAME) students, refugees and students from disadvantaged backgrounds.

It was made possible thanks to the generosity of Professor Dame Jocelyn Bell Burnell, who won the prestigious Breakthrough Prize in 2019 for her role in the discovery of pulsars. Dame Jocelyn chose to donate her £2.3m prize award to the Institute of Physics to set up the Fund.

The Fund will support studies in a physics department, school or faculty at a recognised postgraduate degree awarding institution in the UK or Ireland. The department must hold either/ both Juno or Athena Swan status, current at the date of enrolment of the student on the course. The grant is linked to the student. If the student transfers to another eligible host university/institution, the awarded grant moves with them.

More detail can be found at: iop.org/bellburnellfund

More information about beneficiary and their project here

Over five decades Jocelyn Bell Burnell has been a researcher an educator and a role model, serving as the first woman president of both the Institute of Physics and the Royal Society of Edinburgh and as a President of the Royal Astronomical Society.

Radio pulsars, a form of rotating neutron star that emit beams of electromagnetic radiation as they spin. The first radio pulsar was discovered in 1967 by Jocelyn Bell Burnell, then a graduate student from Glasgow University working with Antony Hewish at the Mullard Radio Astronomy Observatory in Cambridge. The Nobel Prize in Physics 1974 was awarded jointly to Sir Martin Ryle and Antony Hewish ‘for their pioneering research in radio astrophysics: Ryle for his observations and inventions, in particular of the aperture synthesis technique, and Hewish for his decisive role in the discovery of pulsars.’ As a research student at the time of the discovery, Jocelyn Bell Burnell was not included in the 1974 Nobel Prize citation, despite having been the first to observe and analyse the astronomical objects. Now, as Professor Dame Jocelyn, she is keen to support those who want to embark upon a physics research career and need some extra financial help.

She was one of a group of senior female scientists whose efforts led to the creation of the Athena SWAN awards which recognise commitment to advancing the careers of women in science, and is a renowned champion in the area of encouraging women to study the physical sciences. In 2016 the IOP’s Very Early Career Female Physicist Award, made by the IOP Women in Physics Group, was renamed the Jocelyn Bell Burnell prize in her honour.

Other honours include the Royal Astronomical Society’s Herschel Medal in 1989, the Royal Medal of the Royal Society in 2015, and the 2019 President of Ireland's Presidential Distinguished Service Award.