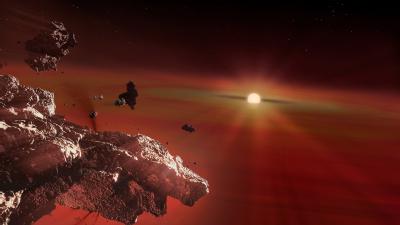 Remnants of planets with Earth-like crusts have been discovered in the atmospheres of four nearby white dwarf stars by University of Warwick astronomers, offering a glimpse of the planets that may have once orbited them up to billions of years ago.

These crusts are from the outer layers of rocky planets similar to Earth and Mars and could give astronomers greater insights into the chemistry of the planets that these dying stars once hosted.

The discovery is reported today (11 February) in the journal Nature Astronomy and includes one of the oldest planetary systems seen by astronomers so far.

The University of Warwick-led team were analysing data from the European Space Agency’s Gaia telescope of over 1,000 nearby white dwarf stars when they came across an unusual signal from one particular white dwarf. The researchers at the University of Warwick received funding from the European Research Council and the Science and Technology Facilities Council (STFC).

They used spectroscopy to analyse the light from the star at different wavelengths, which allows them to detect when elements in the star’s atmosphere are absorbing light at different colours and determine what elements those are and how much is present. They also inspected the 30,000 white dwarf spectra from the Sloan Digital Sky Survey published over the last 20 years.

The signal matched the wavelength of lithium and the astronomers soon discovered three more white dwarfs with the same signal, one of which was also observed with potassium in its atmosphere. By comparing the amount of lithium and potassium with the other elements they detected – sodium and calcium – they found that the ratio of elements matched the chemical composition of the crust of rocky planets like Earth and Mars, if those crusts and been vaporised and mixed within the gaseous outer layers of the star for 2 million years.

Lead author Dr Mark Hollands from the University of Warwick’s Department of Physics said: “In the past, we’ve seen all sorts of things like mantle and core material, but we’ve not had a definitive detection of planetary crust. Lithium and potassium are good indicators of crust material, they are not present in high concentrations in the mantle or core.

“Now we know what chemical signature to look for to detect these elements, we have the opportunity to look at a huge number of white dwarfs and find more of these. Then we can look at the distribution of that signature and see how often we detect these planetary crusts and how that compares to our predictions.”

The outer layers of the white dwarfs contain up to 300,000 gigatonnes of rocky debris, which includes up to 60 gigatonnes of lithium and 3,000 gigatonnes of potassium, equivalent to a 60km sphere of similar density to Earth’s crust. The amount of crust material detected is similar in mass to that of the asteroids we see in our own solar system, leading the astronomers to believe that what they are seeing around all four stars is material broken off from a planet, rather than an entire planet itself.

Previous observations of white dwarfs have found evidence of material from the inner core and mantle of planets, but no definitive evidence of crust material. Crust is a small fraction of a planet’s mass and the elements detected in this study are only detectable when the star is very cool. White dwarfs are in the dying phase of their lifecycle, as they have burnt out their fuel and cool over billions of years. These four white dwarfs are thought to have burnt out their fuel up to 10 billion years ago and could be among the oldest white dwarfs formed in our galaxy.

Co-author Dr Pier-Emmanuel Tremblay from the University of Warwick said: "In one case, we are looking at planet formation around a star that was formed in the Galactic halo, 11-12.5 billion years ago, hence it must be one of the oldest planetary systems known so far. Another of these systems formed around a short-lived star that was initially more than four times the mass of the Sun, a record-breaking discovery delivering important constraints on how fast planets can form around their host stars."

Among the oldest of these white dwarfs, one is 70% more massive than average and so its huge mass would normally cause any material in its atmosphere to disappear relatively quickly, leading the astronomers to the conclusion that it must be replenishing the crust material from a surrounding debris disc. Furthermore, the astronomers detected more infrared light than expected for the white dwarf alone, which indicates a disc being heated by its star and then re-radiated at longer wavelengths.

Dr Hollands adds: “As we understand it, rocky planet formation happens in a similar way in different planetary systems. Initially, they are formed from similar material composition to the star, but over time those materials separate and you end up with different chemical compositions in different parts of the planets. We can see that at some point that these objects have undergone differentiation, where the composition is different to the starting composition of the star.

“It is now well understood that most normal stars like the Sun harbour planets, but now there’s the opportunity to look at the frequency of different types of material as well.”

Artist’s impression of planetary crusts accreting into a white dwarf available to download at the link below. This image is free for use if used in direct connection with this story but image copyright and credit must be University of Warwick/Mark Garlick: https://warwick.ac.uk/services/communications/medialibrary/images/february_2021/accreting_wd2.jpg

Caption: Remnants of planetary crust disintegrating under the tidal forces around a cool white dwarf. Material in the disc becomes vaporised close to the central star and flows onto the white dwarf atmosphere. Credit: University of Warwick/Mark Garlick