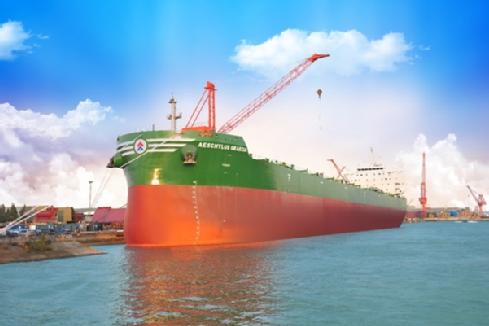 A University of Warwick academic has been afforded the rare honour of being made the godmother of a newbuilding ship.

The christening ceremony of the 82,000 tonne ship took place in the Yangzijiang shipyard in Jingjiang, China, by breaking a bottle of champagne over her side as she was named AESCHYLUS GRAECIA by Dr Emmanuela Bakola.

Dr Bakola, of Warwick’s Department of Classics and Ancient History, was invited to become AESCHYLUS GRAECIA’s godmother by Mr Evangelos Angelakos and his son Mr Stephanos Angelakos representing the Owners. AESCHYLUS GRAECIA joins Angelakos (Hellas) S.A.’s managed fleet of 15 vessels, all named after classical subjects, to help evoke and celebrate the role and importance of Greek culture over the last three millennia.

Named after the poet Aeschylus, the oldest surviving dramatist, AESCHYLUS GRAECIA is a 229m long cargo ship and is currently at sea on the way to the Port of Vancouver in Washington on the Pacific coast of the United States. 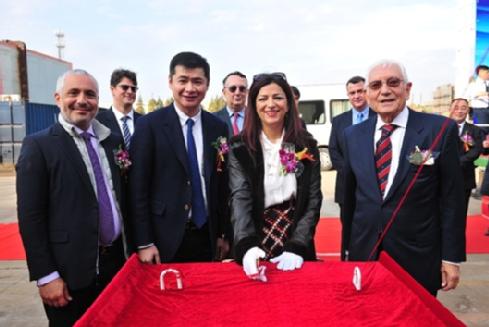 “This occasion has been, and will certainly remain, one of the most special and memorable moments of my life. I feel very honoured to be in this position and I would like to thank you from the depths of my heart for involving me in this remarkable event.

“The opportunity to name and give a blessing to an 82,000 tonne god-child starting her new life does not happen every day, even in the exciting and sometimes adventuresome world of the University.”

“Aeschylus was a truly international poet, a spirit open to knowledge and radical new ideas of his time at home and abroad. Although he lived in one of the most innovative, productive and fascinating societies of the ancient Greek world, ancient Athens, he was profoundly curious and open to ideas that came from beyond Athens, and from all around the then known world, eventually even adopting Sicily as his second homeland.

“He would have been impressed with Angelakos’ insistence to expand the enterprise not only materially, but also culturally, to turn it into an opportunity for trade in ideas and culture.”

At the ceremony in Jingjiang, the ship builders were presented with a handmade bronze bust of Aeschylus, specially commissioned for the occasion, as well as books on classical Greek theatre and culture.

For Dr Bakola, the ideas of Aeschylus as a writer and his work provide thought-provoking links with the location of its building and the role AESCHYLUS GRAECIA will go on to play:

“Aeschylean tragedy is constantly asking: By being so inventive and creative, by creating technology, wealth and civilisation that constantly push the boundaries of what we have, are we not disturbing the order of this world? The role of wealth, the wealth that comes from trade especially, is a particularly prevalent issue in the thought of Aeschylus. But he answers this question positively, by affirming that the balance of this world is maintained if creating comes with sharing in the community, by giving back, in the way of paying a debt back to the world.”

Dr Bakola also referred to the continuous benefactions of Mr Evangelos Angelakos, in Greece and abroad both as a businessman and as Mayor of his beloved homeland, the island of Oenoussae (Oinoussai).