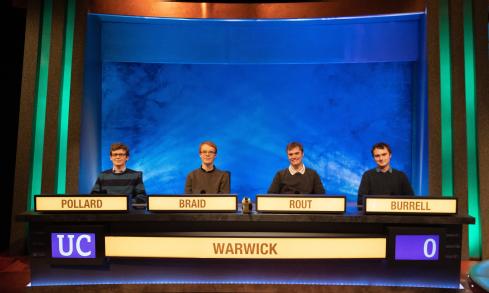 The final will see the two teams meet for the second time this series, with Warwick the victor in the earlier clash by 40 points.

Commenting on his time as a member of the Warwick team, and the process of being selected, Richard Pollard said:

“Taking part in University Challenge has been a fun and challenging experience. When I arrived at university, I hadn’t done any competitive quizzing, and being called back and selected for the team after the trials was a big surprise. Getting as far as we have on top of that was even more so, but it wouldn’t have been possible without the teamwork that was built up over much practice.

"Even in the circumstances, limiting as they have been, the whole process has been very rewarding. You do feel the pressure at times, but being part of a confident team keeps you focused.

"Anyone who might be considering applying for a team should absolutely go for it. You never know how it will go until you try.”

Speaking ahead of the final about his experience as part of the Warwick team and recording the series during the COVID19 pandemic, George Braid said:

“I have always enjoyed quizzes. University Challenge is my favourite simply because it’s the one that asks most about things I’m interested in.

“I wanted to take part when I first started at university, but I didn’t think I’d actually get on a team, let alone one day play in a final. The whole experience was just very good fun, even though I may have felt the pressure at times. It’s a shame that the pandemic stopped us seeing much of the other teams, or indeed each other, outside of the games, but the studios ran everything very smoothly under the circumstances.

“Anyone thinking of trying out for their team should definitely give it a go.”

Commenting on the success of the Warwick team the university said:

“Reaching the final of University Challenge final is an incredible achievement and we are delighted to congratulate the team on their success.

“We are sure that the whole of the Warwick community is looking forward to cheering them on and cannot wait for the final.”