Mayoral Powers and Footprints under Scrutiny in International Research Study 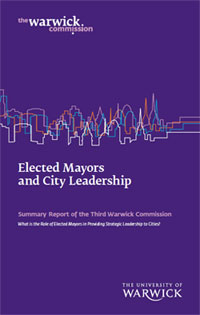 A research Commission launched by The University of Warwick has warned that the Government’s drive to encourage cities to adopt elected mayors cannot provide a ‘one-size-fits-all solution’.

The Warwick Commission on Elected Mayors and City Leadership also supports calls for mayors to have a formal remit that extends beyond the city boundaries which are currently being proposed in referenda in ten core English cities.

Warwick’s research team interviewed 42 mayors, staff and senior council figures in the UK, Canada, Australia, New Zealand and the US in what is believed to be the widest ranging international comparative research exercise, at least in relatively similar political systems in the 'Anglosphere'. It draws on a range of existing evidence as well as a thorough analysis of how the history of local government has brought the question of elected mayors to the forefront now.

In the summary report for the Commission, research director Professor Keith Grint writes:

Directly elected mayors offer the possibility of greater visibility, accountability and co-ordinative leadership as well as re-enchanting the body politic, and much of this derives from their relative independence from party discipline through their direct mandate and through their four year term.

However, he also says:

In some cities an elected mayor may not be necessary because they have already constructed a significant identity and are vigorously and strategically led…..

Voters in ten English cities – Birmingham, Manchester, Bristol, Wakefield, Leeds, Bradford, Sheffield Newcastle, Nottingham and Coventry – face the decision about the form of leadership for their council. Leicester already has an elected city mayor, whilst Liverpool will elect its first on May 3.

Much of the current debate around elected mayors centres on the range of powers they will or will not be given, with the Government being criticised for not specifying exactly what powers new mayors will attain.

….the absence of powers undermines the point of the local engagement and the mayoral alternative is perceived by some to be aimed at addressing this very issue.

In addition to the summary of the research to date, the Commissioners themselves make a specific statement with a series of points ranging from ‘power’ and ‘powers’ to transition. The independent Commissioners particularly focus on those issues which will come into focus beyond the referenda in the cities which choose the elected mayor model.

On the issue of so called ‘Metro Mayors’, the Commission says:

The areas people identify with are not bounded necessarily by city council boundaries. Mayors are more likely to be effective, both in supporting the economy and making effective decisions for local citizens, if they are responsible for functioning economic areas. The Commission’s research indicates: “there is no point in electing a mayor whose remit does not cover the necessarily boundary-spanning regions that could foster economic growth – the so-called Metro-Mayor.” Government should return to considering extending to city region/metro mayors where this is appropriate for local areas at the earliest opportunity.

In a wide ranging report, the Commission also makes recommendations on the ability of councillors to expel – or ‘recall’ – a dysfunctional mayor:

The relationship between mayor and full council needs to be constructed so the mayor is visibly held to account, yet their mandate should not be undermined by a body which has been separately elected. There needs to be an appropriate recall process which enables the removal of an elected mayor in office in extremis. The [research] report includes the example from Japan of the Local Autonomy Law with a system of Mutually Assured Destruction involving both local government leader and local assembly.

The Commission predicts that mayoral pay could become a political minefield:

Setting levels of remuneration for mayors and their principal officers and advisers can absorb significant time and political capital. Where possible, developing models and approaches to remuneration should be explored at the earliest opportunity.

Ultimately directly elected mayors may be a way of answering the most important question at the heart of governance: what is the purpose of politics? If politics is about how we mediate our individual and collective conflicts then we had better pay some attention to reinvigorating the body-politic: politics is too important to be left to politicians.

The summary report is available to read online or download here. Embargoed copies of the full report are available to the media upon request: marc.reeves@rjfpa.com, 07429 346277

The University of Warwick is one of the UK’s leading universities with an acknowledged reputation for excellence in research and teaching, for innovation, and for links with business and industry. Founded in 1965 with an initial intake of 450 undergraduates, Warwick now has in excess of 22,000 students and is ranked comfortably in the top 10 of all UK university league tables.

Warwick is the second most targeted university, by graduate employers, for graduate recruitment programmes. Warwick is renowned for excellence and innovation within research and in the 2008 Research Assessment Exercise, was ranked seventh overall in the UK, with 65% of the University’s research rated as 3* (internationally excellent) or 4* (world leading).