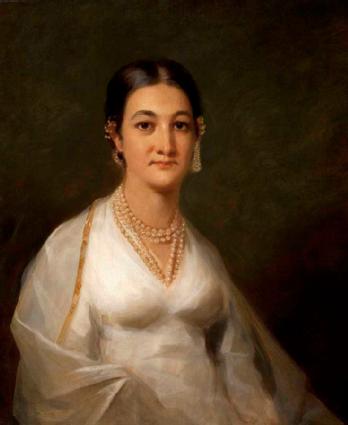 'Portrait of a Young Indian Woman'

‘Portrait of a Young Indian Woman’

To read the suggestions and comments that people posted, click here

To read Viccy's response to your suggestions and comments, click here

To read new comments sent to us after September 2012, click here

What do we currently know about the portrait?

This painting is titled ‘Portrait of a Young Indian Woman’. A leading Raeburn scholar has authenticated the portrait as the work of the British painter Sir Henry Raeburn (1756-1823). Raeburn canvases are notoriously difficult to date, because he rarely signed or dated them. This portrait is thought to have been executed in 1815 in Edinburgh, using oil on canvas. The painting is 30 inches (76.2cm) by 25 inches (63.5cm).

Raeburn is synonymous with portraits of Enlightement men and so this fascinating portrait does not ‘fit’ with his traditional characterisation. Raeburn’s female portraits are understudied, and this Indian woman gives his practice an imperial and gendered dimension which is only just starting to be acknowledged.

What do we want to know about the portrait?

The patron and his/her context

Who commissioned this portrait? What is the artistic context in which this particular portrait was painted?

My Anglo-Indian great-grandparents were in Scotland in the mid-1800s, when my great-grandfather was sent from the Punjab to train as a doctor at Aberdeen University, so Indian / Anglo-Indian women in Scotland in the 1800s were a reality. Their Anglo-Indian son was a portrait painter who co-founded the Royal Society of Miniature Painters, Sculptors and Gravers with Alyn Williams. This isn’t directly helpful re. this “Unknown Object”, but may “pad” its background in terms of knowing that Anglo-Indians were active in portraiture circles and Scotland not long after the date of this painting.

The first of the unknown objects generated a number of responses, the majority of which focussed on unravelling the identity of the sitter. Though known as a portrait of a young Indian woman, it remains unclear whether she is an Indian, or an Anglo-Indian and the appellation ‘young’ is equally misleading because her status – as unmarried or married – is similarly ambiguous. Raeburn is known to have worked as a copier of other artist’s work so the portrait may be a copy of another painting.

My question would be about her jewels. Is there any significance in the pearls? The ear / hair decorations? Would you expect an Indian lady to wear more gold?

In Michael Fry’s “The Dundas Despotism” (pg. 112) Henry Dundas’s family connection with India is indicated as follows: His family had never quite made it as nabobs, though not for want of trying. Like many a needy Scots clan, they sent sons to the East. Three of Henry’s brothers went, and two died there. One fathered a half-caste daughter, Maria….As soon as the waif could travel, at the age of five, they brought her all the way home. She then lived with them at Arniston, to grow up a lively, intelligent and beautiful girl… Perhaps at length she might have been married off elsewhere in the Scots landed gentry, but she died in her twenties.

Since Henry Dundas was the subject of one of Raeburn’s paintings, perhaps Maria was also. If further research indicates this to be Maria, I would love to know.

Addition from Lisa - Regarding Maria Dundas of Arniston, the possible subject of your Raeburn portrait query, Arniston House is open to the public and the home page of their website indicates that visitors to Arniston may view Raeburn portraits—whether these are Dundas portraits, I do not know. http://www.arniston-house.co.uk/ However, in addition to the portrait Raeburn painted of Henry Dundas (First Viscount Melville) of Arniston, he also painted another Dundas of Arniston, General Francis Dundas and his wife, Eliza (although this painting does not appear to hang at Arniston). http://en.wikipedia.org/wiki/File:Francis_Dundas00.jpg

As such, given the Dundas of Arniston subjects that Raeburn is known to have painted, and the Raeburn paintings owned by Arniston House, perhaps “Portrait of a Young Indian Girl” is, indeed, Henry Dundas’ niece, Maria, from India.

Addition from Lisa - Another possible point of interest is that Michael Fry’s “The Dundas Despotism,” discusses Henry Dundas’ involvement with The East India company—see Index, page 417.

If research indicates this is Maria Dundas, I would like to know which one of Henry Dundas’ brothers was her father. Further, wouldn’t mind knowing the identity of Maria’s other two Dundas uncles who lived in India.

Addition from Lisa - Another note from Fry’s “The Dundas Despotism” that indicates Henry Dundas was, at the least, an aquaintance of a Sir John Marjoribanks (of Berwickshire?or Bute?) and encouraged him to take a seat in Parliment: For his new man in Berwickshire, Melville found a Whig defector, Sir John Majoribanks, formerly member for Bute. (pg 341). Perhaps the Sir John named above is the ancestor of Sir John Marjoribanks, purchaser of the Raeburn painting.

Addition from Lisa - According to an obituary in The Gentleman’s Magazine, the Sir John Marjoribanks who served in Parliament for Berwickshire 1818 (apparently encouraged by Henry Dundas’ son, 2nd Viscount Melville, given Henry’s 1811 death) appears to have been the brother of Sir Edward Marjoribanks (Sir Dudley’s father) as discussed in Carol’s letter. Interestingly, at the time of Sir John’s death, another brother, Campbell Marjoribanks, was the Chairman of the East India Company.

In 1854 Sir Dudley Coutts Marjoribanks bought the Guisachan Estate at Tomich in Scotland from the Frazer family. The Guisachan Estate was then about 20,000 acres, but the house had been burnt to the ground in 1747 by the Duke of Cumberland’s troops after Culloden. Sir Dudley built a new mansion house, Guisachan House, and it was here that he and his keeper created the Golden Retriever breed. Sir Dudley Marjoribanks’ son Edward inherited the house and estate when Sir Dudley died in 1894. After the death of his wife Fanny Spencer Churchill (aunt of Winston Churchill) in 1904, Edward left the estate and the house later fell into disrepair. In 1960 the estate was bought by a Frazer descendant.

Sir Dudley’s father, Edward Marjoribanks of The Lees Estate, Coldstream married a young lady, Georgiana De Lautour, who was born in India in 1791. She was only 16 when they married on 1 Oct 1808 and the marriage entry in the St Marylebone, Westminster church register records her father as dead and the marriage with the consent of her guardians. She died in 1849.

Is it possible that she was half Indian and the portrait is of her? She would have been the right age in 1851 and the young lady in the portrait could easily be half European, she is wearing European style clothing.

I haven’t yet researched but is the Sir John who bought the portrait a descendant?

Addition from Carol - Georgina Latour was baptised 25 DEC 1791 Fort St George, Madras Presidency, India her father’s name Francis Latour, mother Ann. If my own family baptismal records are anything to go by the actual register will say whether Ann was a ‘European Lady’ or not on both the baptism and if it can be found the marriage records which will be in the India Office Records at the British Library . I can’t get there myself I live too far away.

Response to Carol from Kate Smith - I went to the British Library and followed up on Carol’s suggestion. Unfortunately neither the marriage register nor the baptismal register noted whether Ann Latour was a ‘European Lady’ or not. Georgina Latour – Baptismal register 1791 N/2/2/141 Francis Lautour m. Anne Hordle – Marriage register 29 Feb 1780 N/2/1/f.408. I did find, however, that Francis Latour had a daughter with someone named ‘Matross’ on 5 May 1778. They named the daughter Mary Latour. Francis and Ann had other children too – these include: Amelia Lautour 02 Feb 1784 James Oliver Lautour 19 Jan 1790 Peter Augustus Lautour 07 Aug 1787.

(Project Advisory Board Member and Head of Art History, University of Edinburgh)

Raeburn’s portraits are notoriously difficult to date because he rarely signed or dated them, so the date of 1815 would have been made on stylistic grounds by a leading connoisseur of Raeburn’s prolific oeuvre. It is fascinating to think that this woman would have been in Edinburgh at this period as we are so accustomed to thinking of Raeburn as the in-house portrait painter of the late Scottish Enlightenment, whose worthy men esteemed in academia, law and medicine so frequently appear on his canvases. He did paint women, of course, but his distinctive style of handling paint has always been seen as more suited to his portraits of men. This portrait adds not only a gendered dimension to his practice, but an imperial accent, which has been consistently underplayed in increasingly nationalistic accounts of Raeburn’s ‘Scottishness’. Raeburn was never an itinerant portrait painter, so the likelihood is that the sitter would have sat to him at his studio in York Place, which was an extension of the capital’s urban development that was the New Town. It would be fascinating to consider who might have commissioned this portrait – a master? a husband? a father? – and whether they too might have sat to the leading Scottish portrait painter at the same time. In other words, could we be dealing with a pair of pendant portraits of which the other half has not been identified? And might there be a Dundas connection? Sir John Marjoribanks gives the portrait a twentieth century provenance, but its location between 1815 and 1940 remains obscure. The various names cited in the comments remind me how many Scottish men were involved in the British empire, whether as administrators, medics or militia. Ellen Filor’s fascinating research on various families from the Scottish Borders, some of whom had their portraits painted by Raeburn, will hopefully uncover further leads as the project progresses.

There is a fascinating group of portraits of Indian women painted by British artists in India – have a look at this well-known example by the Irish artist Thomas Hickey in the National Gallery of Ireland http://onlinecollection.nationalgallery.ie/view/objects/asitem/People$00401210/3/sortNumber-asc?t:state:flow=6a765658-6961-4fde-9b84-62ef664ff7f6

Also, this other triple portrait by Hickey of three Princesses from Mysore (a three-quarter length, when our Raeburn is a half length) which Nigel Chancellor has read as visual propaganda for the smallpox vaccination: see his ‘A Picture of Health: The Dilemma of gender and status in the iconography of Empire, India, c. 1805’, Modern Asian Studies, 35.4 (2001), 769-782.

Comments and suggestions sent to us after September 2012

In October 2012 Roger Majoribanks (who has completed genealogical work on the Clan Marjoribanks) wrote to inform us that although we listed that 'The painting appeared at a sale on 1 February 1940, where it was purchased by Sir John Marjoribanks', in 1940 no such person existed as "Sir John Marjoribanks". Roger notes that a Sir John Marjoribanks of Lees, 3rd Baronet did exist in 1840 but he was only ten years old. His mother, however, was the daughter of an E.I.C.S., so may have had her agent buy it in John's name. Roger tells us that the baronetcy became extinct in 1888 and the estate passed by entail to a
different branch of the family.