Modern Muse: Promotional filming for a new app, sponsored by BP and Deloitte, that connects girls to female professionals to inspire a range of STEM career paths. See the Modern Muse app to find out more. (March 2016)


Chemistry at Work (Birmingham): I ran several 'Diamonds in Science' workshops with Zoë Ayres at Birmingham ThinkTank Science Museum during an RSC sponsored 'Chemistry at Work' event. The event was aimed at Year 8 – 9 pupils from eleven local schools and involved lectures and hands-on activities to demonstate how chemistry is used in practical applications. (Feb 2016)

Women V Cancer Cycle Africa 2015: Eighty women from across the UK took part in a gruelling cycle challenge in Tanzania on behalf of three amazing women's cancer charities: Jo's Cervical Cancer Trust, Breast Cancer Care and Ovarian Cancer Action. The challenge started at the base of Mount Kilimanjaro and finished at the beautiful Ngorongoro Conservation Area, and involved ~ 35 deg heat (44 deg in the valley!), 400K distance through challenging off-road terrains, and 12342 ft total climb including a relentless 4350 ft climb to the top of the mountain on the final day. A massive thank you to all who donated, and if you would still like to donate please see my fundraising page here. (Oct 2015)

Science Museum, London: Members of the "Diamond Team" of Warwick Electrochemistry (those who use diamond for electrochemical measurements) were invited to run an exhibition at the Science Museum's Lates in London. The event was aimed to teach the general public about the 'Next Big Thing' in science. We ran various stalls under the theme 'Diamonds are for sensing' including an interactive quiz, strongman competition, building of diamond models & electrical circuits, and diamond ice sculpting. (June 2015)

Charity Events (Hitchin): We ran various charity events in Hitchin, Hertfordshire including a charity quiz and raffle at Hitchin Football Club and a stall on Hitchin market to raise money for Women V Cancer. Both days were hugely successful and we raised in total over £800 for Jo's Cervical Cancer Trust, Breast Cancer Care and Ovarian Cancer Action. Thank you to everyone who donated and took part! (May 2015)

Charity Quiz (Warwick): I ran a charity quiz and raffle at Warwick SU raising over £250 for women's cancer charities. A massive thank you to the companies who donated prizes and those who took part. (April 2015)

Wolf Run: Myself and members of the Warwick Electrochemistry and Interfaces group completed the Spring 10K Wolf Run. (April 2015)

Charity Work: It has been a successful year for charity work, raising in total over £4500 so far for Women V Cancer charities. Thank you to everyone who has helped and we look forward to doing even better in 2015! www.justgiving.com/Jenny-Webb-Africa (Dec 2014)

Movember: Male members of Warwick Electrochemistry and Interfaces group raised money for men's health charities during 'Movember' by growing moustaches. We ran a bake sale in the Department of Chemistry on their final day in support. (Nov 2014)

CCP5 Annual Meeting: Myself and members of the Theoretical and Computational Chemistry and Physics research groups from Warwick presented at the CCP5 Annual Meeting at Harper Adams University, Shropshire. (Sept 2014)

Charity Run: Members of the Warwick Electrochemistry and Interfaces group will be running the Kenilworth Half Marathon in September to raise money for British Heart Foundation. See our team sponsorship page here.
(Sept 2014)

M3 Glasgow: I presented my research at the 'Modelling Molecules and Materials - M3' MGMS Meeting at University of Strathclyde, Glasgow. (August 2014)

Color Run: Members of the Warwick Electrochemistry and Interfaces Group took part in the Birmingham Color Run for Save the Children. (August 2014)

House of Commons: I was shortlisted to present my research to Members of Parliament at the SET for BRITAIN Exhibition held at the House of Commons. See press release. (March 2014)

Cycle Africa 2015: In October 2015, I will be cycling across Tanzania to raise money for three brilliant women's cancer charities: Breast Cancer Care, Jo's Cervical Cancer Trust and Ovarian Cancer Action. To find out more or to donate, please visit my fundraising page at www.justgiving.com/Jenny-Webb-Africa. Thank you! (Jan 2014)

Seminar Award: Prize for my oral presentation at the RSC Postgraduate Symposium on Nanotechnology at the University of Birmingham. Below is all the prize winners with Dr. Zoe Schnepp (Birmingham). (Dec 2013)

Local Radio: Interview on Radio Plus about my research and impact of the Nobel Prize in Chemistry 2013.
(Oct 2013)

BBC Radio & Science Activity Day: Interview on BBC Coventry and Warwickshire radio to promote public involvement in science, followed by a day on the streets of Coventry engaging all ages in science activities.
(Aug 2013)

Seminar Award: Prize for best student seminar at the CCP5 methods in Molecular Simulation summer school at the University of Manchester for my presentation titled: "Molecular Dynamics Investigation of Biomolecule-Diamond Interactions". The award was presented by Prof. John Harding (Sheffield). (July 2013)

MOAC Conference: I attended the MOAC Annual Conference in Ironbridge, Shropshire. (May 2013)

MEG: I attended the Midlands Electrochemistry Group Meeting at the University of Nottingham. (April 2013)

National Training School in Theoretical Chemistry: I received a place at the EPSRC funded UKTC summer school in theortical and computational chemistry at Oxford University. (Sept 2012)

MOAC Conference: I attended the MOAC Annual Conference in the Peak District. (July 2012)

Poster Award: Prize for poster titled "Diamond Nanopores: A Platform for Single-Molecule Biosensing" at the Inter-DTC conference at the University of Warwick. The award was presented by Dr. Matthew Gibson (Warwick).
(May 2012)

MSc Graduation: I graduated from MOAC MSc with Distinction. Congratulations to all my fellow 2010 cohort!
(Jan 2012)

I started my PhD joint between the Warwick Electrochemistry and Interfaces Group, Notman Group and EPR and Diamond Research Group. (Oct 2011)

Meet the Scientist: Myself and members of the Notman Group took part in the "Meet the Scientist" exhibition at Thinktank, Birmingham Science Museum. The theme was a 'Walk-in Cell' where the public of all ages could learn about the different processes in a human cell. (July 2011) 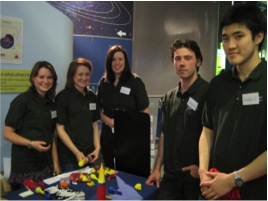 Poster Prize: I was awarded first place for my poster entitled 'Molecular Dynamics Investigation of Nanoparticle-Membrane Interactions' at the MOAC Annual Conference in the Lake District. (July 2011)