So you have a PDB file and you want to use Python to draw a Ramachandran diagram? This page follows on from Calculating the angles. If you look at the output from other tools we ideally want to colour the image background to show the expected regions - this makes "odd" residues really stand out.

Its very simple to write the angles to a file, and use another tool to draw a scatter plot for you - maybe with your favourite spreadsheet program. Or, if you want the background filled in, you might generate an input file for Peter Robinson's Java Program For Drawing Ramachandran Plots.

Using suitable python libraries, its probably very easy to draw a (ϕ,ψ) scatter plot - but ideally we want to highlight the "allowed" and "favoured" regions in the background of the figure. This requires a definition of those regions in a format that python can understand... and a way of using this for a contour plot.

I tried to repeat the analysis by Lovell et al (2003) (see references) of their Top 500 high resolution PDB files to build the required density profile. In the end, I was able to get in touch with the group and they sent me the relevant data (files top500-angles/pct/rama/rama500-*.data, see downloads).

I wrote a simple python function to load these files into Numeric arrays of floats (see downloads for the full script).

I was able to draw this in R using my own R function which uses their standard scatter routines combined with the filled.contour function. Now, its possible to use RPy (R from python) to create this function and call it from within python.

The important "trick" is this step, where after importing rpy and loading the required MASS library we get R to evaluate a command that creates an R function called ramachandran.plot - note that in python you can use triple quotes to insert a string with line-breaks:

Once we have done this, we can call the new R function just like any other R command (remembering of course, that full stops in function/variable/argument names in R are translated by RPy into names with underscores in python):

And this is the end result (see downloads for the full script): 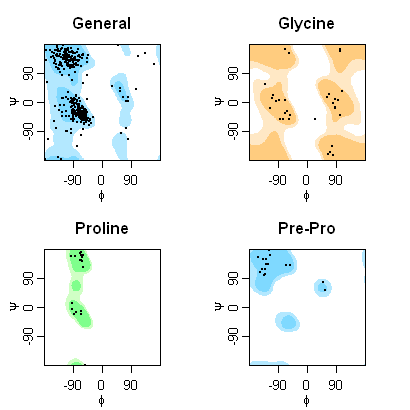 You might want to look at the following files: