On October 19th 2018 I was invited to Lyng Hall School in Coventry to give a talk about the politics of statues, but to do so specifically in relation to the city of Coventry itself. The students quickly embraced the issue, and they will be working with our Widening Participation team on a project this year that will ask whether an alternative way might be found of memorialising Myrtilla, who was brought to this country from St Nevis as a slave in the late seventeenth century. She is buried in the churchyard of St Lawrence in Oxhill in the Warwickshire countryside, and unusually for someone in her situation Myrtilla was provided with a headstone. However, her headstone states that she continued to be 'owned' even in death. The students are interested in developing a new way of commemorating Myrtilla's life. They have also promised to pass on to us any interesting stories they learn about the statues that they encounter in Coventry when they are walking around the city in future. 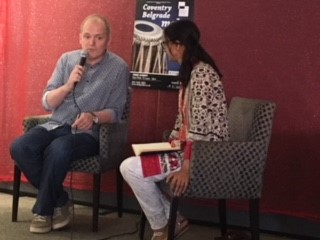 On July 21st 2018 I appeared in an 'In Conversation' slot at the annual Belgrade Mela in Coventry and was also interviewd by Radio Plus. The Mela is a public event hosted at the Belgrade Theatre to celebrate South Asian arts and culture within the UK and, more specifically, within the Coventry and Warwickshire region. I was interviewed by my Department's Widening Participation Officer, Shahnaz Akhter, before the discussion was opened up to a Q&A session with the audience. The theme was the Colonial Hangover project that we have been running with local schools, showcasing the activities we have put on for students within the region and, more generally, asking how modern-day Coventry is located in relation to the ongoing political and economic structures of imperial legacies. At the instigation of both Shahnaz and the audience, there was a distinct Brexit theme to the developing conversation.

On July 23rd 2016 I participated in a roundtable discussion about photographic art and everyday experiences of the British Empire. This was as part of the Colonial Hangover project that I have been running for my Department's Widening Participation Programme. My talk was entitled, 'Photographs, Family Histories and the Colonial Hangover', and I appeared alongside Jason Scott Tilley and Tarla Patel. The event took place at the Belgrade Theatre in Coventry and was an element of the 2016 Coventry Mela, a celebration of South Asian arts and culture within the city.

Public Outreach Event, 'Austerity: Where From and Where To?'

I chaired and was involved in a roundtable discussion between colleagues in my Department and various anti-austerity activists and campaigners from the Coventry and Warwickshire region. The event took place in the Coventry Central Methodist Hall on March 3rd 2016.

An audio recording of all the speakers can be found at http://www2.warwick.ac.uk/fac/soc/pais/research/impact/events/austeritybritain/.