Dani Caverzaschi, first year student in Economics, has been selected to represent Spain in the wheelchair tennis event at the London 2012 Paralympic Games this summer. 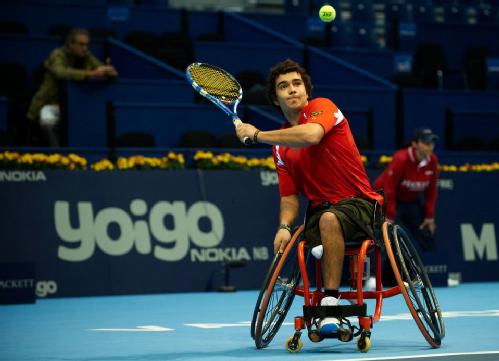 In order to qualify, Dani had to be ranked at least no. 2 in Spain and within the World’s top 55. Dani, who belongs to the Vodafone Team, has already achieved major success representing his country, including being crowned Junior World Champions with his teammate, and securing three Men’s Singles titles at the ITF Izmir Open, the ITF Bulgarian Open and the ITF La Rioja Open in 2011 alone.

For Dani to qualify whilst moving to another country, and under the demands of his economics course, is a fantastic achievement - most competitors at the Paralympic Games are playing full time tennis. Dani is a pleasure to work with and deserves his great success. Dani is a great example of just how much you can achieve with talent, hard work, determination and focus.”

Dani is a remarkable young man, talented both academically and in his chosen sport. Combining the demands of both – especially in a Paralympic Games year – requires discipline and dedication of Herculean proportions. Dani is an example to all and is a delight to have as a student in the Department. We wish him all the very best.”

The Paralympic Games takes place from 29 August to 9 September, with the first wheelchair tennis event being held on 1 September 2012.

Find out more about the 2012 Paralympic Games