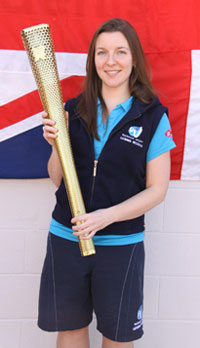 Warwick Sport Manager Gemma Morris is playing a key role in the Olympic football this summer. As a result of the University's involvement as an Official Training Venue, Gemma was given the opportunity to join the London Organising Committee of the Olympic and Paralympic Games (LOCOG) team to support the Olympic Football Event in Coventry.

Gemma, who graduated from Warwick in 2004 and holds an MBA in Sports Management from Coventry University, will be Football Hotels Operations Manager for Coventry, one of the 5 host cities for the football competition. She'll be based at the hotels where the athletes will be staying and will be the key liaison for the hotel, the teams and all the LOCOG functional areas such as transport, security and sport. A team of 4 will be working with her to ensure that the athletes get the best possible experience during their time in the city.

Gemma is really looking forward to the challenge. "I have done about 2 weeks worth of training at the LOCOG offices in Canary Wharf, both generic LOCOG training that all LOCOG staff take part in and then more specifically to my role during the Games" she said. "As part of the training I have spent a lot of time in the hotels building relationships with the staff who will be involved during the Games. I've also been working with all the other functional areas on the detailed planning for the event. Alongside the training I have also spent a few weeks working in London supporting the Villages team in planning for the Olympics, specifically the arrivals of the football teams, and liaising with the National Olympic Committees from around the world on any additional requests the teams may have."

"The Olympic Games is the greatest sporting show on earth, showcasing the world’s best athletes from over 200 nations" Gemma said. "I am hugely excited about London 2012 and have been ever since we were awarded the Games back in 2005. For 18 days the world’s eyes will be on London and the rest of the country and I am confident we are going to deliver a truly breathtaking event that will inspire and bring together people from all over the world. I truly feel honoured that I can be a small part of such a historic event and I am so looking forward to meeting such a diverse mixture of people and delivering a fantastic experience to all involved."

Although Gemma was lucky enough to get tickets for the Beach Volleyball, Hockey and Football, due to her role she may not be able to attend. "In the unlikely event that I may have a spare few hours off, I would love to go down to the Olympic Village as the atmosphere during the Games is going to be like nothing many of us have experienced before or will ever experience again."

Due to injuries she has been more of an armchair sports fan lately, but Gemma is a keen user of Warwick's sporting facilities. "I love playing tennis at the Tennis Centre, as well as the odd game of squash and visit to the gym. I am also a passionate lacrosse player. I'm very involved still with the lacrosse club here and I'm looking forward to taking part in their summer lacrosse league."

As a former Sports Officer at Warwick SU, Gemma has plenty of experience working on sporting activities at Warwick. "I really enjoy working with such a diverse group of people both within the university community and externally to deliver such a varied range of opportunities for all to get involved in" she says. "Warwick is such a vibrant and dynamic campus and I love the passion and enthusiasm that the staff and students participating in sport and our programme have. I really hope that the contribution we all make helps improve the experience for all who are involved and that students will remember their time involved in sport at Warwick for the rest of their lives."