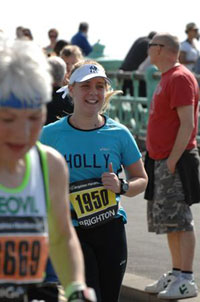 Final-year Theatre and Performance Studies student Holly Parker will be taking part in the Olympic Torch Relay on Sunday 1 July 2012, carrying the Torch through Alcester, near Redditch.

Holly was nominated by fellow Warwick student Jessie Dutton in recognition of her efforts to inspire others through arts and culture. Her volunteering work with young people includes using drama to teach Modern Foreign Languages and working on a community project in the Black Country.

Holly is delighted to be taking part, and felt honoured just to have been nominated. She said:

I’m absolutely over the moon to be carrying the Olympic Torch, it'll be a brilliant few weeks as I finish university, carry the Torch and graduate all in very close proximity!

I got the email to say I'd been nominated whilst I was working as company manager for the National Youth Theatre over the summer, where for a period of two weeks I only got about three hours sleep a night (looking after 300 young teenagers in a riot-filled London isn't very conducive to sleep... especially when you don't sleep until they do!) I was absolutely exhausted so the email came at a good time and it gave me a real energy boost.

As a representative of youth arts, Holly has also helped to award arts funding for young people.

In April 2012 Holly ran the Brighton Marathon for the second time, in honour and memory of Warwick student Hannah Pickering who unexpectedly passed away in her sleep in 2011. Holly said: