One of the most promising theories for the evolution of human speech has finally received support from chimpanzee communication, in a study conducted by a group of researchers led by the University of Warwick.

The evolution of speech is one of the longest-standing puzzles of evolution. However, inklings of a possible solution started emerging some years ago when monkey signals involving a quick succession of mouth open-close cycles were shown to exhibit the same pace of human spoken language.

In the paper ‘Chimpanzee lip-smacks confirm primate continuity for speech-rhythm evolution’, published today, the 27th May, in the journal Biology Letters, a consortium of researchers, including St Andrews University and the University of York, led by the University of Warwick, have found that the rhythm of chimpanzee lip-smacks also exhibit a speech-like signature – a critical step towards a possible solution to the puzzle of speech evolution.

Just like each and every language in the world, monkey lip-smacks have previously shown a rhythm of about 5 cycles/second (i.e. 5Hz). This exact rhythm had been identified in other primate species, including gibbon song and orangutan consonant-like and vowel-like calls. However there was no evidence from African apes, such as gorillas, bonobos and chimpanzees - who are closer related to humans, meaning the plausibility of this theory remained on hold 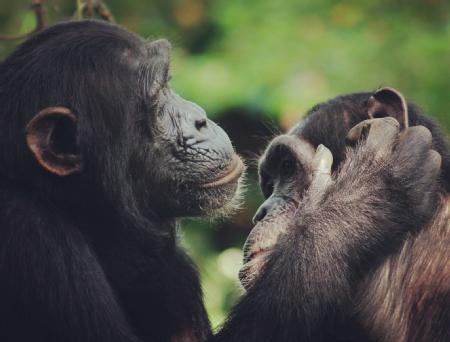 African great apes, the closest species to humans, had never been studied for the rhythm of their communication signals. Researchers investigated the rhythm of chimpanzee lip-smacks, produce by individuals while they groom another and found that chimpanzees produce lip-smacks at an average speech-like rhythm of 4.15 Hz.

Researchers used data across two captive and two wild populations, using video recordings collected at Edinburgh Zoo and Leipzig Zoo, and recordings of wild communities including the Kanyawara and the Waibira community, both in Uganda.

“Our results prove that spoken language was pulled together within our ancestral lineage using “ingredients” that were already available and in use by other primates and hominids. This dispels much of the scientific enigma that language evolution has represented so far. We can also be reassured that our ignorance has been partly a consequence of our huge underestimation of the vocal and cognitive capacities of our great ape cousins.

“We found pronounced differences in rhythm between chimpanzee populations, suggesting that these are not the automatic and stereotypical signals so often attributed to our ape cousins. Instead, just like in humans, we should start seriously considering that individual differences, social conventions and environmental factors may play a role in how chimpanzees engage “in conversation” with one another.

“If we continue searching, new clues will certainly unveil themselves. Now it’s a matter of mastering the political and societal power to preserve these precious populations in the wild and continue enabling scientists to look further.”