New insight on the physical interactions that take place between swarming bacteria when exposed to antibiotics could lead to novel approaches for treating infections in patients.

The bacterial equivalent of a traffic jam causes multilayered biofilms to form in the presence of antibiotics, shows a study published today in eLife. 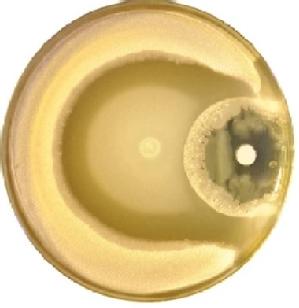 Bacteria can acquire resistance to antibiotics through genetic mutations. But they can also defend themselves via collective behaviours such as joining together in a biofilm – a thin, slimy film made up of many bacteria that is less susceptible to antibiotics. Swarms of bacteria can also undergo a phenomenon similar to human traffic jams called ‘motility-induced phase separation’, in which they slow down when there are large numbers of bacteria crammed together.

“In our study, we wanted to see whether swarming bacteria can use physical interactions such as motility-induced phase separation to overcome certain stresses including exposure to antibiotics,” says first author Iago Grobas, a PhD student at Warwick Medical School, University of Warwick, UK.

In their study, Grobas and colleagues exposed a colony of a common environmental bacteria called Bacillus subtilis to an antibiotic called kanamycin in a dish in the laboratory. They recorded a time-lapse video of the bacteria’s behaviour and found that they formed biofilms in the presence of the drug.

Specifically, the team showed that the biofilm forms because bacteria begin to group together a distance away from the antibiotic, giving way to multiple layers of swarming bacteria.

“The layers build up through a physical mechanism whereby groups of cells moving together collide with each other,” Grobas explains. “The collision generates enough stress to pile up the cells, which then move slower, attracting more cells through a mechanism similar to motility-induced phase separation. These multiple layers then lead to biofilm formation.”

Next, the team tested a strategy to stop this formation and thereby prevent antibiotic resistance from occurring in this way. They found that splitting a single dose in two steps without changing the total amount of antibiotics strongly reduced the emergence of a biofilm.

The authors say further research is now needed to determine if bacteria that are harmful to humans use similar behaviours to survive antibiotic exposure. If they do, then future treatments should take these behaviours into account in order to reduce antibiotic resistance.

“Our discoveries question the way we use antibiotics and show that increasing the dosage is not always the best way to stop biofilm development,” says co-senior author Munehiro Asally, Associate Professor at the School of Life Sciences, University of Warwick. “The timing of the bacteria’s exposure to drugs is also important.”

“These insights could lead us to rethink the way antibiotics are administered to patients during some infections,” concludes co-senior author Marco Polin, Associate Professor at the Department of Physics, University of Warwick, and a researcher at the Mediterranean Institute for Advanced Studies (IMEDEA), Mallorca.

High-res images available to view at: https://warwick.ac.uk/services/communications/medialibrary/images/march_2021/munehiro_jpeg_2.jpg
Caption: Swarming Bacillus subtilis cells form a multilayered biofilm in a dish when exposed to the antibiotic kanamycin (pictured here on the right-hand side of the dish).
Image credit: Grobas et al. (CC BY 4.0)

About eLife
eLife is a non-profit organisation created by funders and led by researchers. Our mission is to accelerate discovery by operating a platform for research communication that encourages and recognises the most responsible behaviours. We aim to publish work of the highest standards and importance in all areas of biology and medicine, including the Physics of Living Systems, while exploring creative new ways to improve how research is assessed and published. eLife receives financial support and strategic guidance from the Howard Hughes Medical Institute, the Knut and Alice Wallenberg Foundation, the Max Planck Society and Wellcome. Learn more at https://elifesciences.org/about.