The University of Warwick is celebrating Coventry’s latest accolade - European City of Sport.

The City has been announced as winning the title European City of Sport 2019 after a successful bid was made this year by Coventry City Council and key partners including the University of Warwick.

Being awarded the title will put the city’s sporting offer in the spotlight, and enhance Coventry’s ability to access support for sports and to be a part of a network of sporting cities.

The news comes after Coventry was named City of Culture 2021, in addition to helping to host the Commonwealth Games in 2022 which will be held in our region. The University of Warwick is currently developing a new multi-million pound Sport and Wellness Hub which is due for completion in 2019 and will create one of the best sports facilities at a UK university. 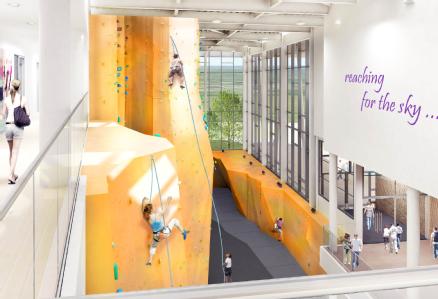 On hearing that Coventry has been awarded the title European City of Sport Stuart Croft, Vice-Chancellor and President of the University of Warwick said: “This is great news and well deserved. There is a huge effort from the City Council and key partners such as the University of Warwick to drive up participation in sport and fitness. Coventry being named European City of Sport is a huge accolade and hopefully will encourage more people across our city to take part and improve health and well-being.

“At Warwick we are supporting these efforts through the creation of a new Sport and Wellness Hub which is the major part of a £49 million investment in facilities. The new hub will offer a fully equipped, state-of-the-art gym housing up to 300 pieces of equipment, highly flexible studio spaces, a brand new climbing wall, bouldering wall and speed climbing wall and elite-player standard squash and netball courts. We’re also building a range of new outdoor sports pitches.

“It will be open for community use and will really raise the bar in terms of sports provision in the city and the surrounding area. With that and other sports developments in the city, this is the perfect time to be European City of Sport. This added to City of Culture 2021 and the Commonwealth Games 2022 heralds a very bright future for arts, leisure and sport in this area and we are delighted to be playing such a central role.”

In February the City Council’s cabinet voted to bid for the title and was visited by competition’s judges. Since the formation of the European City of Sport award, it has been awarded to a number of cities across the UK, including Cardiff, Gateshead, North Lanarkshire, Preston, Lisburn, Stoke-on-Trent and Bristol.

For further details about the University of Warwick Sport and Wellness Hub visit warwick.ac.uk/sporthub