The Human Document: The Photography of Persuasion from 1930s America to Present Day 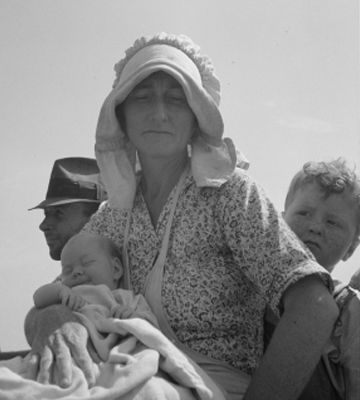 In 1962, the Museum of Modern Art in New York presented The Bitter Years, curated by Edward Steichen. This exhibition included over 200 images taken between the years of 1935-1944 by a small group of photographers working for the Historical Section of the Farm Security Administration Programme (the FSA). Many of the best known Depression-era photographers were fostered by the FSA including Walker Evans, Dorothea Lange and Arthur Rothstein. Under the direction of Roy Stryker, these photographers were sent out to document the plight of rural workers, to introduce ‘America to Americans.’

The Human Document takes The Bitter Years as its starting point in exploring artists’ enduring fascination with the FSA Historical Section– both as photographs designed to awaken human emotions and as a collective body of images. It presents a selection of photographs from The Bitter Years, corresponding to Steichen’s original thematic groupings, alongside photography by contemporary artists including Richard Billingham, Paul Graham, Sunil Gupta, Chris Killip, Susan Lipper and Eileen Perrier as well as the film installation On Photography, People and Modern Times by Akram Zaatari.

Another Minimalism: Art after California Light and Space

This exhibition brings together the work of an international group of contemporary artists whose work builds on terrain first explored by the California Light and Space artists of the 1960s and 1970s. At that time, artists such as Robert Irwin, James Turrell, Maria Nordman and Larry Bell, whose work features in Another Minimalism, were producing radical and ground-breaking work characterised by an interest in immateriality, site-specificity and the experiential. Yet their practices have often been overshadowed by the object-based minimalism of their East coast peers.

Another Minimalism is the first exhibition to recognise and examine the influence of Light and Space artists on a younger generation of artists including Tacita Dean, Olafur Eliasson and Spencer Finch. These artists use materials including glass, mirrors and coloured lights to alter the viewer’s perception of space and time.

A major solo exhibition of photographic and film works by the internationally-respected artist, Gerard Byrne, continues at the Mead Gallery to great critical acclaim.

Renowned for his film installations which re-enact conversations from specific historic moments, Irish artist Gerard Byrne works with photography, video and live art to explore the way we understand the present, through revisiting the past.

A strong sense of time’s playfulness and inauthenticity dominates the exhibition space in the Mead Gallery on the occasion of the Gerard Byrne’s show 1/125 of a second…” said Dominika Mackiewicz in her review of the exhibition. “It is a playground that showcases the illusionistic nature of the photography, language and art itself. This challenging exhibition is an intellectual stimulus, where viewers involuntarily take part in sensorial spectacle.”

Gerard Byrne: 1/125 of a second includes the world premiere of a new film by the artist, which was commissioned by the Mead Gallery with Monash University Museum of Art in Melbourne and Moderna Museet in Stockholm. Gerard Byrne explores in his film this immersive representation of a Nordic wilderness as an image that is fixed both in the time of its making and of the present. The 19th century diorama is a form of representation that anticipates the invention of both photography and cinema. The work stages a confrontation between the photographic image and the forms of representation that it supplanted and raises questions as to what comes next.

The exhibition also includes – amongst other works – the three-screen video work, Subject, for which the artist used archival material from Leeds University to explore students’ experiences of life on campus in the 1960s: a film with some surprising resonances with the University of Warwick today.

Gerard Byrne: 1/125 of a second has been selected as ‘Critics Choice’ by FT Weekend and as ‘Pick of the Week’ by The Guardian Guide. It has been reviewed by critics for The Independent, Art Review, Photo Monitor, AN (Artists Newsletter), The White Review and New Art West Midlands with a further review anticipated in Art Monthly.

Film works are presented according to a schedule, which begins when the Mead Gallery opens at 12 noon and ends at 9pm each evening. Visitors to the exhibition have said: “I love the video on Leeds University. Feels so real, so emotive, so raw. Sex and drugs are interestingly explored; poses questions and allows you to form your own answers”; “The idea of showing different things at different times is so great … and makes you return”; “Very interesting abstract exhibition – more like this please!”

The Monash-Warwick Alliance supports this exhibition, publication and the events programme.

Gerard Byrne is represented in London by Lisson Gallery, in Dublin by Kerlin Gallery, and in Stockholm by Galerie Nordenhake.