NB. It is a good idea to be logged into the Library website in another window when you use this page, so that the links take you directly to the text (if it's a library ebook or digital article).

Look for the colons below (Sitebuilder keeps messing up my spacing) -- some of the links I've introduced, others are self-explanatory.

This is obviously not a comprehensive list (or even necessarily the perfect resource for your essay) and you can find many other resources via the Library and elsewhere.

You know all this already but:

To re-read some Bergson:

Bergson and modernism, in case you want to write about Mrs Dalloway and Prof Bergson:

A general overview of Bergson and time (handily) on Radio 4's In Our Time (with Warwick's own Keith Ansell Pearson). This is really really good for revision purposes:

Radio 4's In Our Time: Bergson and Time

Article on Time, Space and Subjectivity in Genette's thinking

The last chapter of this ebook is a dialogue involving Genette, which might be useful -- and book contains

many other discussions of narrative too:

A dialogue between Genette and narratologist Dorrit Cohn

The ebook of Ricoeur's text:

Useful for connecting Ricoeur's ideas on time and narrative back to Bergson:

Ebook on Ricoeur, narrative and interpretation

Ebook of Mark Currie, About Time

The Dialogic Imagination, our primary text by Bakhtin, is available as ebook via the library catalogue.

A good general guide to Bakhtin, including a chapter on the chronotope:

An article about Bakhtin, chronotopes and narrative (and historical geography):

A discussion of the chronotope in the last chapter, and some connections between Bakhtin and other writing:

Bakhtin and His Others

A book on Deleuze, cinema and national identity with chapters on memory and the time-image:

A PhD thesis on Deleuze and time -- a scary title but there will be useful stuff here (use the WRAP link on the page you get to to find it, and then the search function!):

PhD thesis on Deleuze and time

Lots of useful articles here on Deleuze, time, cinema -- and perhaps some of your interests:

For the film buffs amongst you (which doesn't really include me) but a cool 'map' of durational cinema (cinema that might arguably be seen to foreground time, and duration in particular -- not all 'slow', though much of it is):

A general(ish) guide to Heidegger with some thoughts on anxiety, death (and time throughout):

Heidegger, authenticity and the self

Article on Heidegger, time and the self

A useful book about philosophy and mood, which looks at Heidegger generally, but also discusses anxiety quite extensively -- see the Mulhall and Senderowicz chapters:

An article on Heidegger, time and death -- the addition of Derrida doesn't promise to simplify things much! But there are a few ideas to pick out here (without needing to know about Derrida), especially if you're writing about death in any way:

Whether or not you are interested in the thirties, there is good background stuff here on Heidegger, time and trauma:

NB. In terms of mental health (which anxiety gets us too), the huge Oxford Handbook of Phenomenological Psychopathology has an interesting chapter on Time, another on The Experience of Time and Its Disorders, and also one on Martin Heidegger. The Library page with the full entry on has the list of chapters (the Contents on the ebook website doesn't give the full details so reference the Library page):

Library link to the Oxford Handbook of Phenomenological Psychopathology

Martin Wyllie's original article in Philosophy, Psychiatry & Psychology, 'Lived Time and Psychopathology' -- the Broome article we looked at responded to and expanded the remit of Wyllie's investigation/ argument about the restructuring (and arguably disordering) of time in the experience of mental health (Wyllie focusing on depression; Broome going a bit wider):

A book on time and psychotherapy. Don't worry about the systemic therapy bit -- there is lots of introductory stuff about time and mental health that will be generally useful if you're writing about/ revising this topic in relation to anything we've looked at (or you've read / watched elsewhere):

(There is lots of reading on mental illness that touches on the perception of time -- e.g. Kay Redfield Jameson's work or some of the pieces in Femi Oyebode's Mindreadings but make sure you do keep the 'time' focus. Thomas Fuchs has published an awful lot of philosophy of psychiatry on the experience of time -- definitely worth checking out at least one or two if you're interested in this topic.)

Eric Cazdyn's book The Already Dead: The New Time of Politics, Culture and Illness is available as an ebook on the library catalogue.

There are some interesting thoughts about time (and care) in Languages of care in narrative medicine : words, space and time in the healthcare ecosystem by Maria Giulia Marini (ebook via the Library):

William Cowper, 'On the Receipt of My Mother's Picture Out of Norfolk' 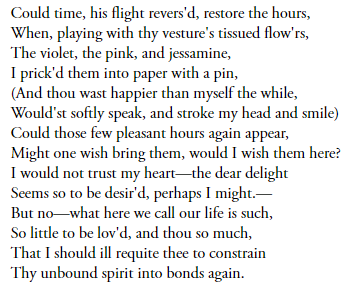 Time and Work (and Gender)

Kathi Weeks, 'Hours for What We Will' -- article on family, work time and feminism (also see 'Gender'!)

From Precarity to Precariousness (article on precarity and time)

A book on feminist time -- more historical than literary in general, but particularly useful chapter on Narrative Time and narrative form in relation to feminist ideas:
Feminism, Time and Non-Linear History

Queer Time -- the Alternative to Adulting

A short, factual website about climate change and some pragmatic 'time' issues (is it irreversible, what is the time lag between action and effects etc.) -- from NASA:
Is it too late to prevent climate change?

A book about 'anthropocene fictions' that deals with time (see particularly the introduction and conclusion, but the index will help you navigate to work you know or are interested in):

Anthropocene Fictions: The Novel in a Time of Climate Change

A slightly leftfield one -- a work of anthropology in part dealing with a community in West Norway (named with the fictional pseudonym Bygdaby for anonymity) who were feeling the effects of climate change. But very interesting on their perception of time and change:

A book about climate change and the future -- see e.g. the interview with Bill McKibben for more explicit remarks on time, but obviously this is useful for a discussion of the future:

[NB: There are quite a few works now on literature and climate change -- use the library catalogue (and Google Scholar) to find them, and time is obviously fairly central to many of them. Just make sure it remains your focus.]

A book by the wonderful time-oriented literary scholar Ben Davies at Portsmouth on sex, time and space in contemporary fiction -- might give some good ideas for reading time in relation to sex/desire/sexuality in The Accidental, The Argonauts, possibly even Severance (though sex and desire don't seem that connected there)

A good general book about the changes in thinking about time in the early C20, and the thought of people like Bergson and Bakhtin:

A TED talk about how we experience time and memory through art (by an artist making huge, immersive installations):

How we experience time and memory through art | Sarah Sze

A National Geographic talk about time perception -- quite simple and untheoretical but touches on a couple of the ideas we looked at early in term 1:

Why time feels like it goes faster as we age