Women of power have long been perceived as problematic figures, able to threaten social frameworks and defy traditionally assigned gender roles. This has caused them to be celebrated as well as reviled from before classical times to the present, but they played particularly potent roles in the late medieval and early modern period.

The research project that I am carrying out as a Leverhulme Early Career Fellow at Warwick explores the visual and literary reception of ancient controversial famous women in mid-fourteenth to early seventeenth-century Europe. By exercising masculine virtues or vices, such as ambition, strength, and courage, these heroines challenged contemporary social expectations; they also tended to confound the categories of virtue and vice, praise and blame, for the deeds that made their famous were performed by means of morally ambiguous behaviour. What model did they provide for medieval and Renaissance women? Were they merely offering an example of how not to behave or did they also somehow offer a positive model? What kind of contribution did they make to the developing notions of female identity between the medieval and early modern periods?

By focusing on the most popular heroines of this type, taken from both ancient myth and history, and the Old Testament (e.g., Medea, Penthesilea, Cleopatra, and Judith), my research discusses the vast tradition of Famous Women as most notably developed in France and Italy from the emergence of a female canon in Giovanni Boccaccio and Christine de Pizan to the women-filled art of Artemisia Gentileschi. My project argues that ambiguous models from antiquity had a more significant and multifaceted impact on the formation of female identity than has previously been acknowledged. Not only will it reorient the focus in the field, which in art history, gender studies and material culture concerns mainly positive, rather than problematic, female characters (e.g., the Roman Lucretia or the Biblical Susannah); but it will also demonstrate the complexity of the interplay between the re- appropriation of ancient models and their manipulation to suit contemporary concerns and societies, contributing to the debate about women and power that still resonates so strongly today. 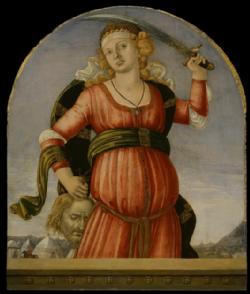