We are entering a great phase of remembrance: the five-hundredth anniversary of the Reformation or, to be more precise, of Martin Luther’s Thesenanschlag – his nailing up of the Ninety-five Theses on the door of Wittenberg’s Schlosskirche or Castle Church. This event almost certainly never happened, but owes its popularity to Philipp Melanchthon’s Vita Lutheri, published following Luther’s death in 1546. Luther did write the Ninety-five Theses on 31 October 1517, but he put them in a letter to his primate, Albrecht, Archbishop of Magdeburg. Writing a letter is not nearly as dramatic a symbol as hammering a nail into a door. The physicality of the anschlag (the attack) gave the moment enormous potency; Luther might have been hammering a nail into the coffin of the medieval papacy. Yet, in truth, the Ninety-five Theses reveal Brother Martin circa 1517 as a loyal critic of the Church. From his covering letter to Albrecht it is clear that Luther assumed that the Archbishop would join him in denouncing the vulgar salesmanship and exaggerated theological claims of Johann Tetzel’s campaign to sell indulgences across Saxony. He was in for an unpleasant surprise.

To find Luther the religious rebel, we need to look elsewhere: perhaps his burning of the papal bull excommunicating him, or his defiance before Charles V at Worms, or the three key treatises he published in 1520. The Address to the Christian Nobility called on the princes of the Empire to become the agents of ecclesiastical renewal, exploding the clergy’s claim to spiritual authority with his ‘priesthood of all believers’. The Babylonian Captivity of the Church was an angry theological essay, written in Latin, which asserted the uniqueness and sufficiency of Christ’s sacrifice on the cross, displacing any need for ‘satisfaction’. In so doing, Luther placed a fresh emphasis on the importance of baptism and denounced four of the seven sacraments, a move that drew a response from (among others) England’s Henry VIII, whose Assertion of the Seven Sacraments earned him the title ‘Defender of the Faith’ from a grateful pope. By contrast, Luther’s The Freedom of a Christian was an eloquent and conciliatory treatise setting out his understanding of justification by faith alone. There was no comparable dismissal of important aspects of medieval theology in the Ninety-five Theses.

Unsurprisingly then, there are more important incidents on the road to the end of Christian unity in the West that have little or no relation to Martin Luther. The publication of Erasmus’ Greek New Testament with copious and increasing annotations across various editions from 1516 comes to mind. It was a hack job, but it still inspired several vernacular translations including Luther’s into German (1522), Jacques Lefèvre d'Étaples’ into French (1523); and William Tyndale’s into English (1526). This invited anyone, regardless of theological training, to offer competing interpretations of biblical texts and challenge the Church, as indeed they still do today. Luther’s ‘achievement’, if it can be called that, was religious fragmentation. It was unintentional, accidental, and he blamed himself for causing it. Luther had aimed at reforming the Church and failed; he was probably too volatile and uncompromising a personality to have ever succeeded. His break with Rome, protected by his prince, emboldened other critics to do likewise, notably in the cities of Switzerland and along the Rhine. The more radical theology of Huldrych Zwingli quickly surpassed Luther’s in importance and influence (as subsequently would John Calvin’s). Zwingli the parish priest, in contrast to Luther the university academic, brought a social dimension to the idea of reform. It was Zwingli’s theology, not Luther’s, that would eventually inform the English Reformation under Archbishop Cranmer.

It is interesting, then, that posterity has settled on the mythical moment of the Thesenanschlag as the origin of the Reformation; indeed it may be informative of the way historical narratives are created. Erasmus, of course, never broke with the Catholic Church but did abandon Basle when iconoclasm broke out there in 1529. He remained an ambiguous figure, a Nicodemite to his Reformation critics, but not a Protestant and therefore not an acceptable causa Reformationis. Zwingli’s career never offered a satisfactory Reformation moment: the ‘affair of the sausages’ was too trivial (one cannot possibly imagine Ferdinand Pauwels painting Zwingli eating a sausage with the requisite gravitas), while the Zürich disputations were perhaps too imprecise. Besides, both events took place long after Luther’s ‘hier stehe ich’ at Worms. By contrast, the Thesenanschlag literally nailed the Reformation to a date and a place. Memory seems to prefer those sharply-defined edges, and that is why the Reformation will be commemorated this month rather than on the quincentenary of one of those more schismatic moments that actually took place. 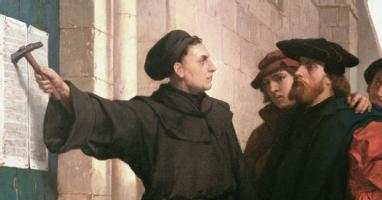