This trip was from 15 August to 4 September 1999, organised by Kumuka Expeditions as their (Northbound) "Inca Heights" Trip

We flew out with American Airlines (which while competitive in price seem to offer the least for it - only Varig, the Brazilian national airline seemed to have been worse), to arrive with a day and a half in La Paz before the tour started.

We walked through La Paz to the Residencial Rosario, the hotel where the Kumuka trek was departing from, to check when we should be meeting up. We went for lunch in El Lomo a nearby restaurant recommended in our guide books. We then went off to take photos in La Paz, and find an internet cafe to email home.

The Kumuka pre-departure meeting was that evening, where we met our tour leader, Claudia (from Holland), and our driver, Cliff (from South Africa), and most of the tour group. After the meeting we had dinner in the hotel - it was very good but very slow.

The first day of the Kumuka tour was designated a free day in La Paz. We brought our baggage over to the Residencial Rosario and where told to check into the Hotel Estrella next door.

We met up with two more of the group, Andy and Gareth, to go and have a look at the museums in town. We tried to visit the "four in one" museums, but ran out of time and just managed a quick look at the Museo Costumbrista Juan de Vargas, Museo del Literol, or Museo de la Guerra del Pacifico (which documents the pacific war in which Bolivia lost its sea access - lots of interesting old maps of South America), and the Museo de Metales Preciosos Pre-Columbinos (includes rooms of gold, silver, copper and ceramics). We also looked at the Museo de Etnografia y Folklore which had some brilliant models of village scenes and tombs.

Karen, Gareth, John and Andy in front of the Presidential Palace: 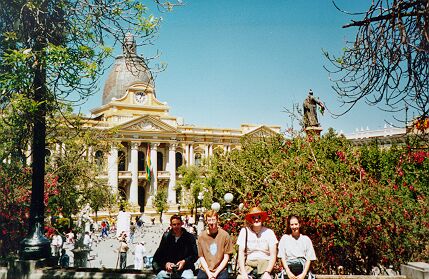 We walked past the Cathedral again, stopped in El Lomo for lunch and then wandered round the little stalls in the nearby streets for hats, gloves and souvenirs. La Paz is cheaper and seems to have more to offer here than Lima.